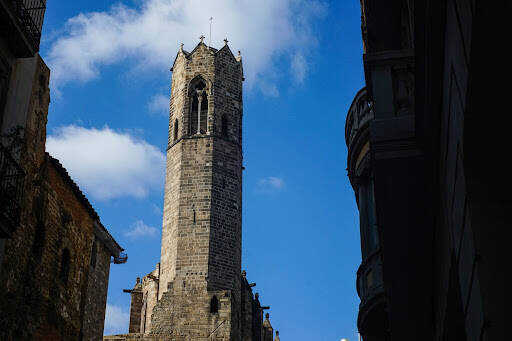 The ancient Main Royal Palace towers over the center of the Gothic Quarter in Barcelona.

As of yesterday, I have been in Barcelona as a Spanish resident for one full week. Let me tell ya, it is everything I did not imagine and more!

I knew this experience would be an entire learning process in itself — even outside of my schooling here. After only a few days living in the center of the city, I realized that I would be learning how to live all over again, and quite differently this time.

Barcelona is a very international city, meaning I have met more people that are not from here than people that are actual locals. In fact, I don’t think I have met one true local at all. Many of the people here are traveling through, relocating for work or studying abroad through internships or universities.

The culture shock has set in, and it’s been a doozy. This is a very fast-paced city, where people very much mind their own business. Conversation and interaction has been hard to initiate, especially since I am very obviously not from here. I’m beginning to find that there are many small, like-minded communities throughout the city; you just really have to go digging for them.

There local musicians play and sing while passersby enjoy the folk tunes.

For example, I was walking through the beautiful Ciutadella Park, and a small group of women, tucked back in a corner of the park, barely caught my eye. I saw a big shiny hula hoop flying through the air, and I instantly knew exactly what they were doing, as my friend group from home danced and did tricks with hoops.

“Nice!” I thought, “Finally, some people with similar interests!”

Approaching them, and knowing that my Spanish is not the best, I became nervous that they would not be interested in a newbie joining their group. Five minutes later, I was added to a group chat and invited to next week’s gathering!

Not only has finding like-minded people been a challenge, but finding people that relate to my situation has been very hard, as well. My school orientation was this past Friday, and to my dismay, I am the only non-European student at my entire school. Many of the exchange students already knew each other from other universities across Europe and already established friendships.

The first exchange program event that I heard of while being here was a European exchange party at one of the local bars. At first, I felt like I would be intruding to ask to join, but I decided very quickly that I would be crashing the European-only party, American style.

The Cathedral of Barcelona sits prettily as a common place for locals to spend a relaxing evening with a beautiful view.

I could go on and on about the random little things that I would have never expected about living in a foreign city. Like, the fact that it is impossible to find a water filter because there is no such thing as a department store. Or that every single person in this city owns a dog, and they are all the most well behaved dogs I’ve ever seen. But god forbid you try to pet any of them!!! Or that ‘tapas’ is Spanish for ‘small plates’ and not a type of Spanish food, which I naively assumed until I tried to order just a ‘tapa’ at lunch the other day.

I’ve only been here a week, so I continue to remind myself that things will get easier, and I will adjust to this new way of living. However, one thing I’ve been pleasantly surprised with is finding beauty in the struggle of knowing nothing. I can’t get frustrated with myself for not knowing, I just have to be willing to learn.

It is an act of trial and error. And although I’ve been finding error after error, the validity of finally doing something correctly and confidently is more rewarding than any other experience so far.