Thousands of Palestinians participated on Tuesday afternoon in Nablus in the funeral of three terror suspects killed by Israeli forces in an ambush.

“With blood and spirit, we’ll redeem you, o martyr!” mourners sang as they carried the bodies of the three Palestinians through the streets.

Earlier on Tuesday, Israeli security forces shot and killed the three Palestinians during an operation in Nablus’ al-Makhfiya neighborhood. Israeli defense officials said the three belonged to a terror cell that had conducted shooting attacks against Israeli military posts and personnel over the past few weeks. No Israelis were wounded in the assaults.

Palestinian media reports identified the gunmen as Ashraf al-Mubaslit, Adham Mabrouk and Muhammad al-Dakhil, and said they were affiliated with the Al-Aqsa Martyrs Brigades terror group. A Fatah spokesperson confirmed that the three Palestinians were Fatah members.

A fourth Palestinian suspect, Ibrahim Nablusi, was originally reported to have been killed in the raid as well. Nablusi is still at large, according to an Israeli security official.

In videos that recalled the bygone years of the Second Intifada, thousands bearing yellow Fatah and green Hamas banners marched down the city’s main thoroughfares during the funeral. Armed men, some masked, could be seen marching in the procession; some fired bursts of bullets into the air.

“Revenge! Revenge! Brigades! Qassam!” Palestinians called out in another clip circulating on social media, referring to the armed wings of Islamic Jihad and Hamas, respectively.

In a statement widely circulated in Palestinian media, the Al-Aqsa Martyrs’ Brigades vowed revenge for its members’ deaths.

Echoing comments made earlier in the day by Palestinian Authority officials, Arab Israeli politicians condemned the operation as an “execution.” The mostly Arab Joint List bloc of parties released a statement calling the shooting deaths of the three Palestinians “a crime against the Palestinian people.”

“These assassinations and these executions are an act of terrorism according to international law. Only the end of the occupation will end the violence,” said Joint List parliamentarian Ahmad Tibi. 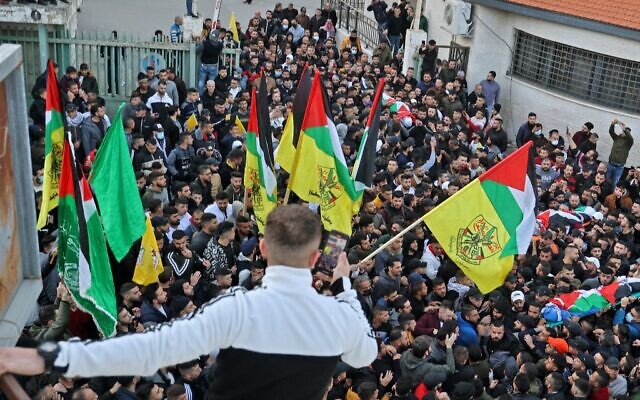 Mourners attends the funeral of three Palestinians killed by Israeli forces during a raid against what Israel said was a terrorist cell, on February 8, 2022 in the West Bank city of Nablus. (Jaafar Ashitiyeh/AFP)

Israeli police denied that the operation was a targeted killing, saying that officers from the counter-terrorism Yamam unit first sought to arrest the suspects. Police also said officers fired when they saw the suspects getting ready to shoot at them and killed them before they fired a shot.

Recent weeks have seen a spate of shooting attacks directed toward Israeli security forces and military positions in the northern West Bank, most recently on Saturday evening when shots were fired at a Border Police vehicle near Jenin. At least five such shooting attacks have been carried out in the past two weeks, none of which have caused Israeli injuries.

An Israeli security official said the Palestinian suspects were on their way to commit another attack, necessitating their intervention.

“They were a ticking bomb,” the official said, speaking on condition of anonymity in accordance with departmental regulations. Designating a suspect an imminent threat gives security services legal leeway to use more force than they would otherwise be permitted to use.

The Palestinian Authority cabinet called for an international investigation.

“The cabinet calls upon the United Nations and international human rights groups to condemn this heinous crime and work to bring the perpetrators to justice,” the ministers said in a statement.

The Climate Crisis and Responsible Journalism

As The Times of Israel’s environment reporter, I try to convey the facts and science behind climate change and environmental degradation, to explain – and critique – the official policies affecting our future, and to describe Israeli technologies that can form part of the solution.

I am passionate about the natural world and disheartened by the dismal lack of awareness to environmental issues shown by most of the public and politicians in Israel.

I’m proud to be doing my part to keep Times of Israel readers properly informed about this vital subject – which can and does effect policy change.

Your support, through membership in The Times of Israel Community, enables us to continue our important work. Would you join our Community today?

Join the Times of Israel Community Join Our Community Already a member? Sign in to stop seeing this

You’re serious. We appreciate that!

That’s why we come to work every day – to provide discerning readers like you with must-read coverage of Israel and the Jewish world.

For as little as $6 a month you can help support our quality journalism while enjoying The Times of Israel AD-FREEas well as accessing exclusive content available only to Times of Israel Community members.