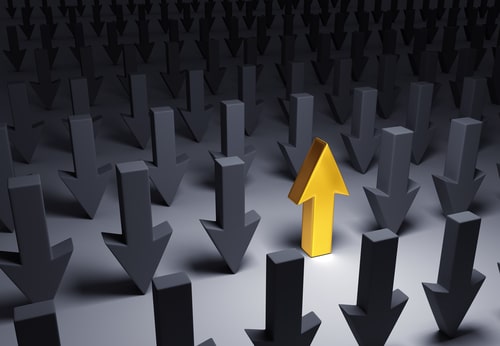 (Kitco News) Gold is catching a bid as markets worry the Federal Reserve could opt for an emergency rate hike before the March meeting to try and tame inflation.

Gold is up nearly 2% on the week as more investors turn to the precious metal amid a widespread risk-off sentiment in the marketplace. At the time of writing, April Comex gold futures were trading at $1,841.30, up 0.21% on the day.

This week’s shockingly high US inflation report has added more uncertainty regarding the Fed’s tightening plan.

With consumer prices rising 7.5% in January, the highest in 40 years, Goldman Sachs is now projecting seven 25 basis points hikes this year. There is also growing consensus for a 50 basis point hike in March. And some are even not ruling out an emergency move by the Federal Reserve prior to the March meeting.

In the meantime, the 10-year Treasury yield surged further above 2%, a level not seen since August 2019.

“The gold price chart is looking constructive. The immediate cause was hot inflation data. The Fed is now losing some investor confidence. It looks like they are scrambling to fix what’s already a policy mistake. And gold is benefiting from that panic,” Gainesville Coins precious metals expert Everett Millman told Kitco News.

A 50 basis points hike is possible in March, but what’s even more likely is the Fed choosing to do a rate hike in between the FOMC meetings.

“There is some precedent for that. The immediate reaction to either of those moves would be a selloff for gold. But overall, the beginning of a rate cycle will be bullish for gold,” Millman said. “Based on historical observations, any time the Fed begins rate hikes after telegraphing them in advance, gold has performed well at the beginning.”

“The 50 basis points hike in March is more probable. But gold has not fully priced that in yet. Treasuries have done that, but gold still moved higher. Gold is still looking for the Fed to remain dovish,” Cholly noted.

The level gold will be looking to breach next week will be $1,850 an ounce. The precious metal already attempted to approach this resistance numerous times in the past several weeks but was unsuccessful.

“Gold will be challenging $1,850, and we could see that breached on the next attempt,” Cholly pointed out. “We had an impressive rally in light of all the inflationary data. Gold is starting to embrace the fact that rates are moving higher as inflation is lasting longer. This is real inflation, and gold is finally starting to come to terms with this. We are going to get that pop above $1,850. I’m getting more bullish now.”

FOMC meeting minutes and other data to watch

The big item on the agenda next week is the January FOMC meeting minutes. Markets will be looking for clues in terms of how aggressive the US central bank could allow itself to be.

“The minutes of the January FOMC meeting, due out next Wednesday, will help to clarify whether officials would consider a 50bp hike. Assuming his nomination wins the approval of the Senate Banking Committee in the vote scheduled for 15th February, we also expect Fed Chair Jerome Powell to schedule his semi-annual ‘Humphrey-Hawkins’ testimony for some time later this month,” said Capital Economics chief North America economist Paul Ashworth.

Powell’s semi-annual testimony would be the most appropriate venue to deliver some major policy shifts, added Ashworth.

“We still think that the unusually flat yield curve will prevent the Fed from being able to hike too aggressively this year and will force it to lean more on using quantitative tightening to drive long yields up. Even though the 10-year yield finally climbed to 2% this week, the 10s-2s spread is down to less than 50bp now,” he said.

Below are other data to keep a close eye on next week.