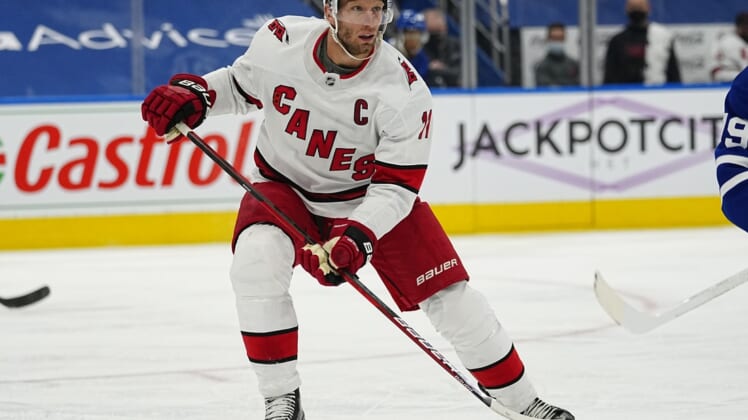 The Carolina Hurricanes certainly didn’t expect to be spending this weekend in Saint Paul, Minn.

It’s the second visit of the season to the Western Conference venue, but Saturday night will mark the first time the Hurricanes take on the Minnesota Wild.

The teams were set for a Dec. 14 meeting, but that afternoon after COVID-19 tests came back positive in alarming numbers for the Hurricanes, the game was called off. Instead of playing, the teams headed home.

This will be a makeup of that postponed game, with the Wild perhaps even more anxious to hit the ice. Minnesota won six consecutive games prior to the All-Star break and then had a clunker upon resuming play.

Meanwhile, the Hurricanes have been busy this week. They won for the first time in three games since the All-Star break by drubbing the Boston Bruins 6-0 on Thursday night. Frederik Andersen recorded the 34-save shutout.

It even involved a goal from captain Jordan Staal, who hadn’t scored since October.

“I feel my game has gotten better of late,” Staal said. “It was a long time without scoring, but we were winning a lot of hockey games.”

Carolina’s latest victory included the return of winger Teuvo Teravainen, who had missed the previous four games with a lower-body injury, to the top line. Teravainen racked up three assists in Boston.

“It takes a special kind of player to be able to do that (in his first game back),” Hurricanes coach Rod Brind’Amour said. “He does a lot for us in every situation, so he was real important for us.”

The Hurricanes have earned at least one team point in six of their last seven games, going 5-1-1 in that stretch.

Back in Minnesota, this will be Carolina’s fourth consecutive road game prior to returning home for a pair of home make-up games.

The Wild have played just once since the return to action, falling 2-0 on Tuesday night at Winnipeg.

Wild forward Jordan Greenway said the team needs “to get our mojo back” and get on track.

“Going forward, we have to find a way to get back to our game,” Greenway said. “We’ve got to figure out how to get back to doing what we did to have success.”

“We do have to challenge them to do the right things to have that bounce back,” Evason said. “We’re excited to see our response and that has to obviously happen when they drop the puck on Saturday night.”

Evason said the Wild bring up the importance of being a gritty team on a daily basis, so that might be the aspect that he’ll evaluate most closely.

“How we can play our game better to allow us to have success?” Evason said. “It’s the guys in the room. It’s the leadership group. It’s their mentality.”

The Wild will have to pay attention to the defensive end as well. Carolina has nine games with six or more goals. Sebastian Aho is the team’s first 20-goal scorer of the season, notching two at Boston to move to 21.