RelishMix annually has taken a holistic view of the 24-hour viral effect for trailers airing ads on Super Bowl Sunday with an apples-to-apples comparison of titles across Facebook, Twitter, YouTube and Instagram. As social word of mouth spreads, materials are shared, reposted and reviewed by fans and film and series talent. RelishMix stats from the 24-hour Super Bowl impact on TikTok were incremental for only a few of the movies and shows during the Big Game.

The measurement below includes both owned and earned assets by the studios and streamers as well as notable cast feeds. Also included below is the postgame traffic on teaser/trailer spots that dropped just before Sunday, ie, Nope, Jurassic World Dominion, Ambulance, The Adam Project, Top Gun: Maverick, Sonic 2, Moon Knight and Doctor Strange 2.

Now, Amazon and Disney are trumpeting higher traffic than RelishMix’s for their upcoming projects, September 2’s Lord of the Rings: The Rings of Power and May 6’s Doctor Strange 2, respectively. WaveMetrix clocked both projects’ resonance coming out of the Super Bowl and measured extra media sectors, but no context has been provided in regards to how both titles compared to rival studios’ others trailers from Sunday or previous Super Bowls. 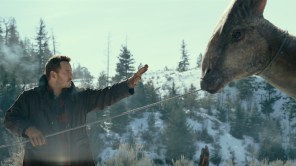 Amazon is claiming that Lord of the Rings: The Rings of Power holds the all-time post-game traffic for a trailer dropping during the Super Bowl with 257M views (no other comps or context were provided to the press), with 73% of that generated from overseas given the IP’s popularity abroad. RelishMix measures Lord of the Rings’ 24-hour traffic at 80.3M. WaveMetrix says that the big traffic number is from all trailer video copies on YouTube, Facebook, Instagram, Twitter and TikTok, as well as Amazon’s YouTube, Facebook, Instagram, Twitter and TikTok channels. Both paid and organic trailer traffic is included. The trailer is also running on Amazon’s website. Fan reaction videos are excluded.

‘The Lord Of The Rings: The Rings Of Power’: Watch Super Bowl Ad

Note that the 24-hour online traffic for previous non-Super Bowl trailers, Spider-Man: No Way Home and Avengers: Endgame, clocked in at 355.5M and 289M views respectively.