A 34-year-old mother needs all of her fingers amputated and could lose her legs after being struck down with sepsis.

Sadie Kemp, from Peterborough, was building a toy kitchen with her two-year-old son on Christmas Day when she felt a sharp pain in her kidneys.

The mother-of-two was taken to hospital screaming in agony, but doctors only gave her painkillers and said she should come back if it got worse.

By the early hours of Boxing Day Ms Kemp was back, and claimed she was placed in an induced coma for two weeks.

Doctors discovered her pain was down to a kidney stone which led to an infection and then triggered sepsis — a life-threatening condition where the body attacks its own tissue.

It can also cause blood clots which cut off blood supply to limbs and leave patients needing amputations.

The NHS Test and Trace worker had her left fingers amputated this week, and is set to lose all five on her right hand when her wounds have healed. Medics have yet to decide whether her toes, feet and legs can be saved.

Describing her ordeal, Ms Kemp revealed when she came round she told her mother that she ‘should have turned off the life support’.

But her mother asked if she would rather see her children — Kenzie, 16, and Hendrix, 2 — at her bedside or at her grave.

Ms Kemp said: ‘I’ve realized I have been given a second chance at life. The doctors have told me they are so confused that I’m still here, I shouldn’t be alive given the amount of poison I had in my blood.’ 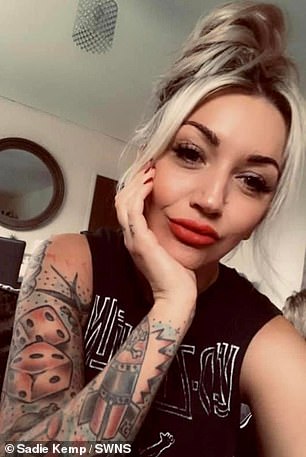 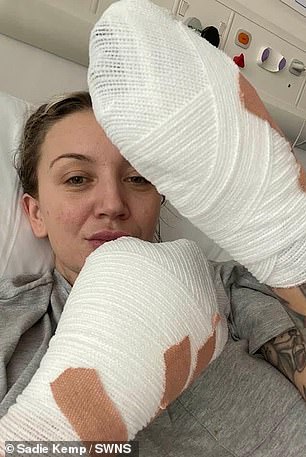 Before sepsis (left) and afterwards (right). Sadie Kemp, 34, from Peterborough, felt a sudden pain in her abdomen on Christmas Day but thought it was because she was helping her son build a toy kitchen 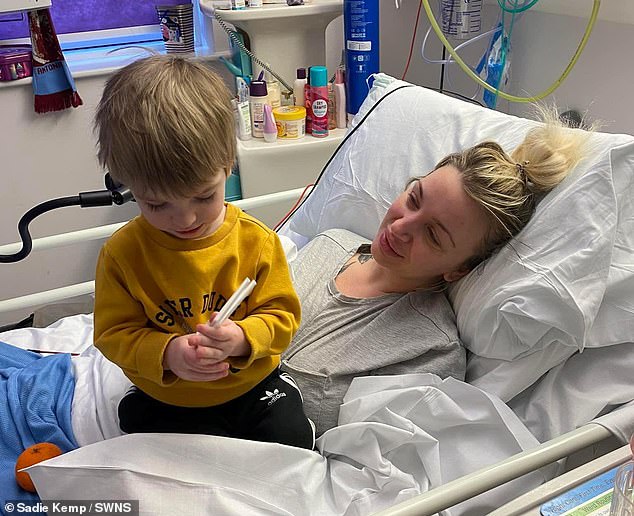 Ms Kemp pictured with her Hendrix, two, in hospital. She says they are having to move house because she no longer qualifies for the property 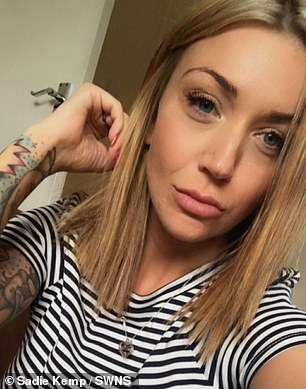 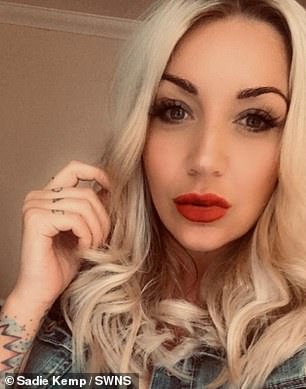 Ms Kemp is pictured above before she was diagnosed with sepsis, which has led to her fingers needing to be amputated. Doctors are also considering whether her legs need to be removed 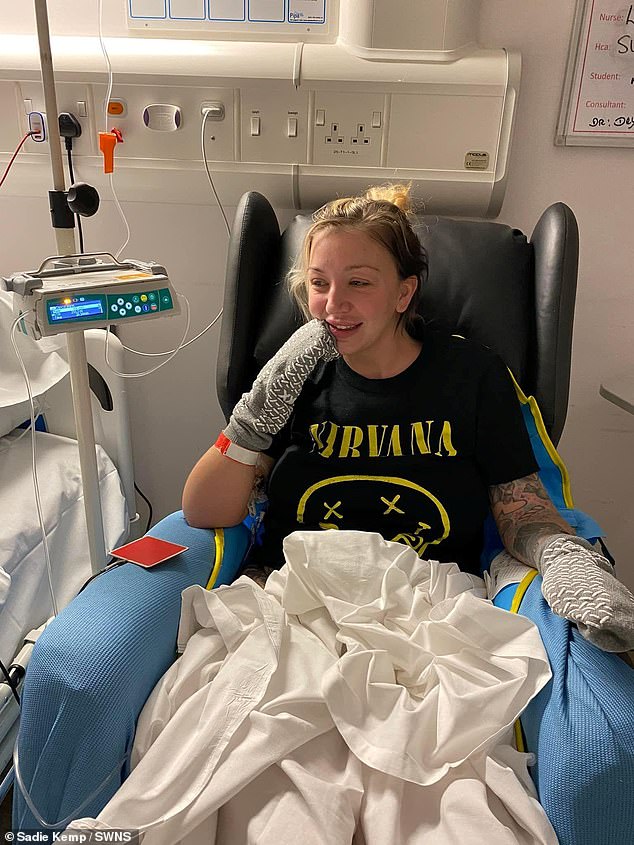 Ms Kemp is pictured above in hospital. Ms Kemp said: ‘I’ve realized I have been given a second chance at life. The doctors have told me they are so confused that I’m still here, I shouldn’t be alive given the amount of poison I had in my blood.’

Sepsis, known as the ‘silent killer’, strikes when an infection sparks a violent immune response in which the body attacks its own organs. It can be triggered from any type of infection.

It is the leading cause of avoidable death, killing around 45,000 a year, and the Daily Mail has long campaigned for more awareness.

If caught early, the underlying infection can be controlled by antibiotics before the body goes into overdrive — ultimately leading to death within a matter of minutes.

Sepsis occurs when the body reacts to an infection by attacking its own organs and tissues.

About 45,000 people die from sepsis every year in the UK. Worldwide, someone dies from the condition every 3.5 seconds.

Sepsis has similar symptoms to flu, gastroenteritis and a chest infection.

Symptoms in children are:

Under fives may be vomiting repeatedly, not feeding or not urinating for 12 hours.

Anyone can develop sepsis but it is most common in people who have recently had surgery, have a urinary catheter or have stayed in hospital for a long time.

Other at-risk people include those with weak immune systems, chemotherapy patients, pregnant women, the elderly and the very young.

Treatment varies depending on the site of the infection but involves antibiotics, IV fluids and oxygen, if necessary.

But the early symptoms of sepsis can be easily confused with more mild conditions, meaning it can be difficult to diagnose.

Sepsis can also lead to clots forming to block blood vessels, limiting the supply of vital nutrients and oxygen to the body’s limbs.

Starved of these tissue resources in the limbs can quickly die, leading to them needing to be amputated to avoid an infection spreading to other parts of the body.

When the back pain first struck, Ms Kemp thought it was due to bending down to help put the screws into Hendrix’s toy kitchen.

She went to have a bath because she thought it would help.

But then, she told the Mirror: ‘half an hour later I was screaming in pain on the floor saying I felt like someone was squeezing my kidney.’

Ms Kemp was placed in a two-week coma at Peterborough City Hospital.

When she woke up, doctors said they may need to amputate both her arms and legs.

But Ms Kemp now says there is a chance her legs could be saved, whereas initially they were considering an amputation from below the knee.

The remainder of her hands will be sewn into a pouch in her abdomen.

This technique is used to raise the chances of remaining tissue surviving, by increasing blood flow to the area. It has previously been used for war veterans returning from Afghanistan who suffered serious injury.

Ms Kemp, who is divorced, said she has now lost her home because of sepsis.

She and her two sons were living in a house provided by a charity, but they must now move out because she is disabled.

Her job with NHS Test and Trace has also ended, Ms Kemp says, because her condition has left her unable to drive all over the country for contact tracing.

‘It has left me without a job and a house.

‘I’m not earning money for my kids. They haven’t got a roof over their heads and that makes me feel terrible. I just want to be there for them and give them some security

‘I was going through a divorce before this which had already cost me £10,000.

‘I’d just met my new partner and I thought I was finally starting from scratch and getting somewhere and then sepsis hit.’

Two of her friends have set up a GoFundMe page to raise £20,000 to cover childcare costs while Ms Kemp remains in hospital. It has so far got £13,000 in donations.

But the friends say they will now need to set up a second £25,000 call for donations to fund prosthetic fingers for Ms Kemp.

They wrote yesterday on the call for donations: ‘Good afternoon everyone, just wanted to thank every one so so much for their kind donations.

‘Sadie is going to need as much help financially as she can to get the home adaptations and other help she needs to live an independent life as a young mother.’

Dr Ron Daniels, an intensive care doctor and director of the UK Sepsis Trust, said Ms Kemp was ‘enormously lucky’ to have survived.

‘With sepsis that develops that quickly and cause multi-organ failure to the extent that the supply of blood to digits and limbs is compromised, then survival rates are in the order of 30 per cent,’ he told MailOnline.

He added: ‘I think questions need to be asked as to whether the hospital assessed her adequately.

‘Were any blood tests taken, what was her physiology at that time?, and so forth.’

‘I do wonder whether during the pandemic attention on Covid has compromised our ability to reliably spot other conditions.

‘We have all quite understandably focused on Covid, but when someone comes in with a condition other than Covid it might be that they might not have received quite as much attention.’