It’s better to hit the gym than go for a run if you want a good night’s sleep, a study suggests.

For sleep-deprived people, lifting weights or doing push-ups could provide 17 more minutes of sleep a night compared to going for a jog or cycle, researchers found.

It is thought that tiny tears in your muscles after strength-training workouts may require more sleep to heal properly.

The study looked at 386 overweight or obese people, aged 35 to 70, who lived sedentary lives and had relatively high blood pressure.

They were split into four groups, with one group doing no exercise and another spending three hours a week of strength training on gym machines.

A third group did three hours of weekly aerobic work, running on a treadmill or using an exercise bike. The final group did a combination of both types of exercise.

All participants in the study reported their quality of sleep, how long they slept for and how much of their time in bed was actually spent asleep.

Among study participants not getting at least seven hours of sleep when they started the exercise sessions, those doing running and cycling or using a cross-trainer gained 23 minutes of sleep a night on average.

But that rose to 40 additional minutes of sleep for those doing the strength training. 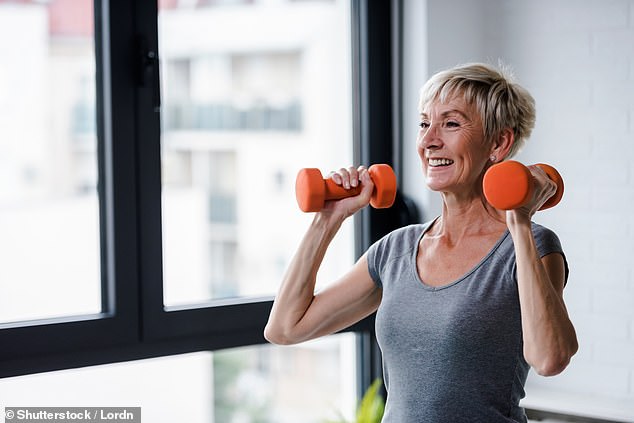 It’s better to hit the gym than go for a run if you want a good night’s sleep and could give you an extra 17 minutes of sleep per night, a study suggests (file)

Sleep quality and sleep disturbances improved in all groups, including the group that did not exercise.

A spot of gardening at the weekend is just as good for longevity as doing hundreds of push-ups, sit-ups or squats, research suggests.

Experts found doing between 30 and 60 minutes of strength training per week staves off an early death by up to a fifth.

This could include lifting weights or using our bodyweight and resistance bands.

With the average adult capable of 10 push-ups per minute, that would involve at least 300 per week.

But the researchers also found that heavy gardening that involves digging and shovelling was just as beneficial.

Keeping bones and muscles healthy in our senior years is crucial in preventing a host of illnesses and diseases and can even slow down aging.

The latest research was done by academics at Tohoku University in Japan, who reviewed more than a dozen international studies.

Results doing showed between 30-60 minutes of muscle-strengthening activity per week lowered the risk of dying by up to 20 per cent.

Such muscle-building activities can include squats, push-ups and sit-ups, as well as digging and shovelling in the garden.

Tohoku University experts say the benefits are even greater when looking specifically at at the risk of death from heart disease, diabetes, and cancer.

Lead researcher Angelique Brellenthin, from Iowa State University in the US, said that while aerobic activity is often recommended to insomniacs, little research has been done into the effects of resistance training on sleep.

‘Therefore, if your sleep has got noticeably worse over the past two stressful years, consider incorporating two or more resistance exercise training sessions into your regular exercise routine to improve your general muscle and bone health, as well as your sleep.’

The study, presented at the American Heart Association’s epidemiology and prevention conference in Chicago, asked people running and cycling to do so at a moderate to vigorous intensity.

Those in the resistance group had a gym machine set to their individual fitness level so that they lifted weight to the point of exhaustion.

The performed three sets of eight to 16 repetitions on resistance machines to work all the major muscle groups in a session.

After 12 months, the sleep-deprived people in the strength training group saw their sleep improve by 40 minutes a night, compared to only around 17 minutes for those doing both types of exercise.

Experts also suspect muscles which are forced by exercise to grow and adapt release hormones which improve sleep.

People in the resistance group reported falling asleep three minutes earlier on average than those in the other groups.

Someone going to bed for eight hours would spend 20 minutes less lying awake at night after doing strength-training exercise, the results suggest.

This was based on a 4 per cent improvement in time lying awake reported by the strength-training group.

Sleep quality and sleep disturbances, like getting up to urinate or being too warm in bed, improved in all groups of people within the study, including the group that did not exercise.

The results are important because a lack of sleep, or poor-quality sleep, has been found to increase the risk of high blood pressure, high cholesterol and hardening of the arteries.

A failure to get enough sleep is also linked to weight gain, diabetes and inflammation, which can worsen the risk of a stroke, heart attack or early death.