A man’s tongue turned black and ‘hairy’ after he was put on a pureed diet following a stroke.

The Indian patient, in his 50s, developed a thick carpet of dead skin and bacteria on his tongue within two months of eating blended meals and soups.

He developed the harmless condition, known medically as lingua villosa nigra, while in care following a stroke that paralyzed his left side and made it difficult to chew.

The patient was taken to hospital after two months when his black tongue developed yellow stains as a result of food getting stuck in the ‘hairs’.

His carers were given simple cleaning advice and told to brush his tongue thoroughly. The condition cleared up after 20 days.

Up to 13 per cent of adults suffer ‘black hairy tongue’ at some point in their lifetime to varying degrees, according to the American Academy of Oral Medicine.

The surprisingly common condition is often caused by poor oral hygiene, but it has been spotted in people who eat mostly soft foods.

Harder foods scrape dead cells from the tongue as we eat and dentists recommend brushing the tongue twice a day to keep it rejuvenated. 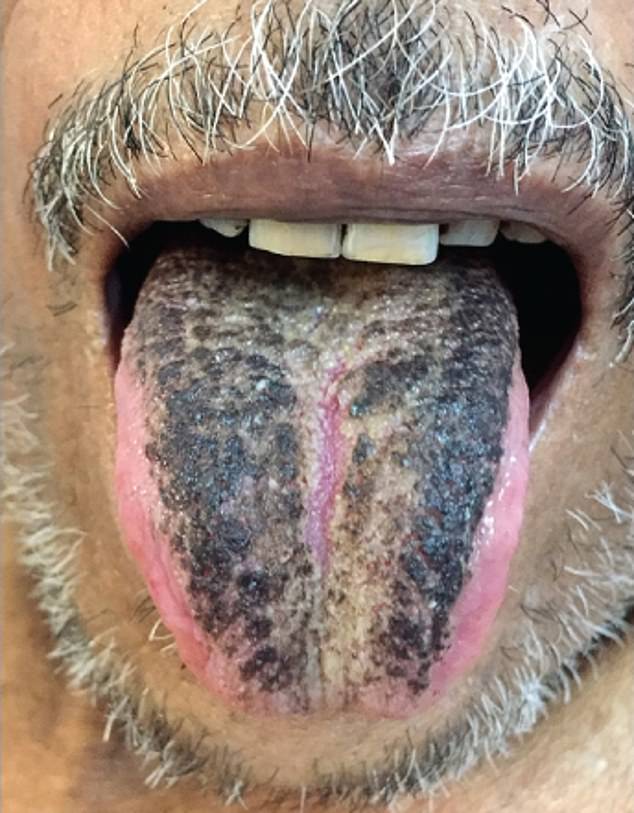 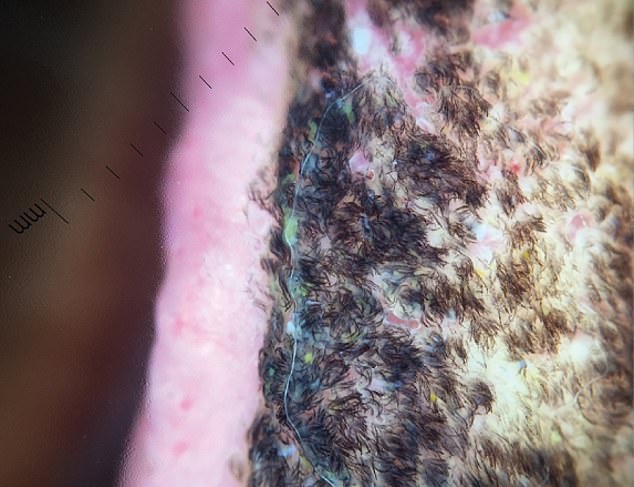 The Indian man was taken to Medical Trust Hospital in Cochin, Kerala, after carers noticed him develop a thick carpet of hair-like fibers on his tongue

The latest case was detailed in a report by doctors from the Medical Trust Hospital in Cochin, Kerala, in the journal Jama Dermatology.

They revealed the patient suffered a stroke three months earlier, which paralyzed his whole left side, including his face, and made it difficult to chew.

He was put on a diet of pureed food and liquids, and about two and a half months later, his caretakers noticed ‘black pigmentation’ covering the surface of his tongue.

Dermatologists — led by Dr Puravoor Jayasree — diagnosed him with lingua villosa nigra after taking mucus samples from his tongue.

Writing in the journal, the doctors said: ‘The patient and caregivers were given advice regarding proper cleansing measures, and the discoloration resolved after 20 days.’

Black hairy tongue is a temporary and harmless condition that makes the tongue turn dark and furry.

It is usually caused by a build-up of dead skin cells on the papilla — finger-like projections on the surface of the tongue that contain taste buds.

But it can also be associated with poor oral hygiene, tobacco, irritating mouthwashes and certain antibiotics.

The papilla usually grow up to about 1mm (0.04 inches) before falling off but can reach lengths of 18mm (0.7 inches) if the tongue is not regularly scraped.

This means diets of soft food and liquids — which do not adequately abrade the tongue’s surface — can trigger the condition.

If the papilla get too long, debris and bacteria can pile up.

What is black hairy tongue?

Black hairy tongue is an unusual, harmless condition characterized by a ‘hairy’ enlargement and discolouration of the filiform papillae.

The filiform papillae are tiny conical bumps found on the surface of the front two-thirds of the tongue that do not carry taste buds.

It is also known as hairy tongue and lingua villosa nigra.

What causes the condition?

Hairy tongue most often occurs in adults over 40 years of age and is rare in infants.

It is commonly caused by poor oral hygiene although a range of medications have been linked to hairy tongue including penicillin, erythromycin and tetracycline.

Smoking, alcohol, cocaine and coffee can all increase the risk of developing it.

The filiform papillae can grow up to 18mm in length — a ‘hairy’ appearance.

The tongue becomes discoloured, usually brown or black, although brown, yellow and green have also been described.

Hairy tongue is usually asymptomatic and the main problem is its unsightly appearance.

Occasionally patients may complain of a burning or tickling sensation on the tongue, nausea, or halitosis (bad breath).