Woman, 47, finds her itchy eyelid is a result of skin CANCER that appeared as a lesion growing on top of her eye

By Mansur Shaheen US Deputy Health Editor For Dailymail.Com

A 47-year-old woman went to an eye clinic, concerned about an eye itch, only to find out she has cancer.

The Chinese case study from Xi’an No.3 Hospital in Xian, China, around 450 miles from Wuhan, was published this week in the New England Journal of Medicine.

The woman said the problem started two weeks before she sought medical attention. 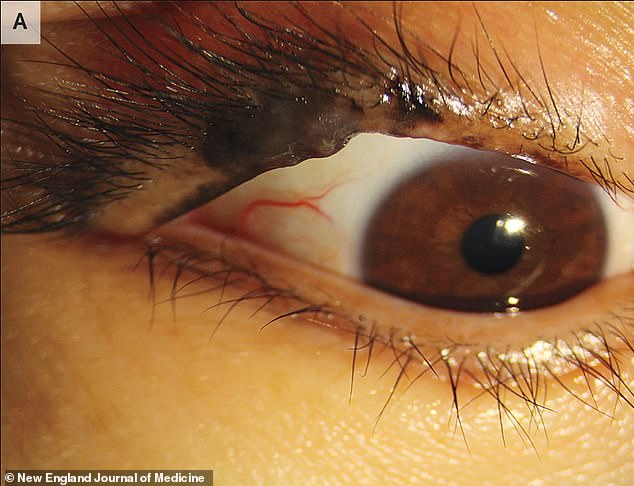 When the woman, 47, went to a doctor they found something protruding from under her eyelids, giving doctors the first hint something was wrong just above her right eye.

An initial examination of the woman’s eye in August found something protruding from under her eyelid of her right eye, giving doctors the first hint something was wrong.

Doctors performed an eyelid eversion, a process in which they lift up the eyelid and have the patient look downward to make the top of their eye visible.

The examination revealed a pigmented lesion on top of her eye – a mix of black and pink coloring. The lesion was growing on the palpebral conjunctiva, a clear membrane on the inside of the eyelid that connects the eye to the tissue surrounding it.

Doctors performed a biopsy to remove part of the lesion. An analysis found that it was malignant, and diagnosed the woman with malignant melanoma – a serious type of skin cancer.

But researchers note that this kind of melanoma marked by pigmented lesions is a rare form of eye cancer. Months later, the woman’s lesion has not expanded, a promising sign that treatment is working. 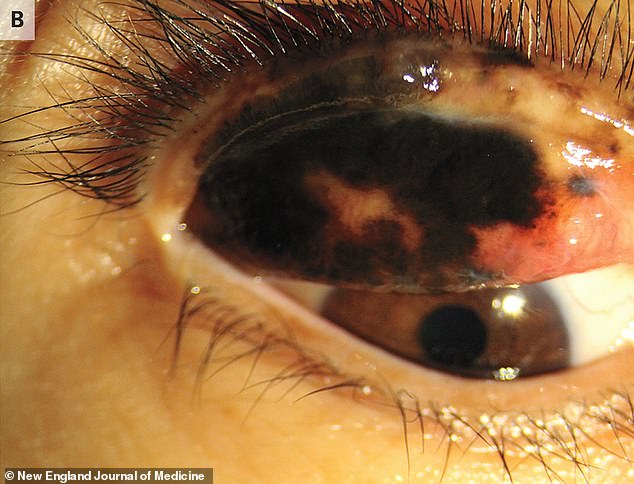 After performing an eyelid eversion, the doctors found a malignant lesion on top of her eye

She was offered surgery to remove and treat the lesion, but declined. Instead, she chose treatment with pembrolizumab, a popular antibody drug used to treat melanomas, among other cancers.

In regular follow-ups, doctors have reported that the lesion has not expanded or spread, researchers write.

Ocular melanoma cases like the one the woman suffered are extremely rare, only occurring in one out of every five million adults.

Her case is even more rare, as it did not begin growth out of the uveal tract, which is where a majority of ocular melanoma cases arise from.

Sometimes there are no symptoms of the cancer until it has become extremely serious, but early signs include blurred vision, floaters or flashes in the eye.

The condition is very survivable; around 80 percent of patients live at least five years after diagnosis.