The Broncos’ current but outgoing CEO prefers to keep the stadium downtown — with upgrades. Ellis seemed to take losses harder than he enjoyed the wins.

Joe Ellis, the Broncos’ chief executive officer and controlling owner delegate in transition, said the recent fire at Empower Field at Mile High has now affected 14 suites and a couple hundred seats. Much of the restoration work comes from water damage. Remember, the fire ignited in an upper section of the stadium, and water flows downhill.

“Yeah, the fire department comes in and takes no prisoners when it comes to putting out fires,” Ellis said during a sit-down interview Monday with 9NEWS. “As they should. We were just fortunate, a few more minutes without a response, it could have been a heckuva lot worse.”

The suites should be cleaned up and refurbished in time for the start of the season. The seats below the East Club Lounge may take a little more time as Ellis said the issue is the steel risers that support the seats buckled beneath the extreme heat. Replacing those steel risers add a great deal of complexity to the job. 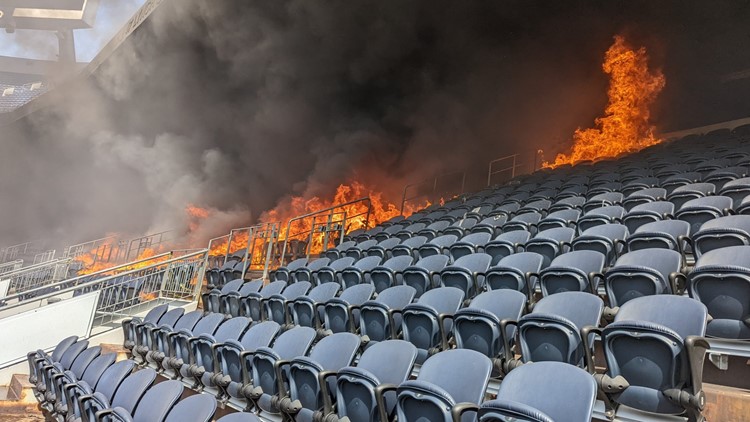 “At first I was sort of dismissive, a small little fire with a few chairs or something like that,” Ellis said. “But when I got down there and saw the magnitude of it and what it did to a certain small part of the building, it was not an insignificant event. Our staff along with the fire department and all the people associated with evacuating the building, which was actually a big deal, did a great job. Listen, it’s nothing like a forest fire that takes out a neighborhood of 100 homes like happened up in the Marshall Fire or anything like that. I don’t want anyone to think it was to that level at all. But fires are not to be messed with. They are serious incidents.”

Having started his NFL career with the Broncos 40 years ago – his first job was selling ad space in the Broncos’ game day programs – Ellis is attending his final NFL owners meetings, at least in his current capacity as the team’s boss. The Broncos are currently for sale with the expectation the new owner will be in place before the regular-season opener in early September.

This may not be the best time to ask, as images from chaired seats in Empower Field’s third-deck bowl are still fresh in the minds of Broncos Country, but about the stadium. The “new Mile High” began hosting games in 2001 – the night before 9/11 was its first regular-season game – and the local taxpayers who helped fund the stadium through a carryover .1 percent sales tax from the Coors Field project no doubt expected to enjoy their football venue for more than 21 years.

Still, there are Taj Mahals passing for football stadiums going up every couple years in the NFL. Ellis made it clear he believes the Broncos should stay put so long as the stadium gets its necessary upgrades. But the new owner may want to follow his $4 billion investment in buying the team by giving it a shiny new place to live.

RELATED: Ellis: More than 5, less than 20 bids on Broncos ownership

“I’m biased. I like a downtown stadium,” Ellis said. “I think it’s good for the city and it’s good for the team. There’s a lot of vibrancy to downtown. Maybe not right now with COVID but over time I’ve always felt the stadium being located where it is has been more advantageous than having a stadium out by the airport, something like that.

“That’s my personal bias. A new owner is going to have to make a decision as to whether he or she believes that this stadium can be sustainable through upgrades that are needed and we have plans for that are in the drawer. Or if he or she believes that you have to build something else — Your own SoFi or your own AT&T Stadium like Jerry (Jones) has in Dallas or your own Allegiant Stadium like Mark Davis has in Las Vegas — in order to keep up with the rest of the league and the expectations of fans.

“But I think our existing stadium at Empower Field at Mile High has longevity to it and there’s a bunch of things we can do to it. A bunch of improvements we can make that can make it last a long time.

“The other component to that is there’s a substantial real estate play. It’s available in the south parking lots that the city has preapproved in terms of a working plan. There are still some things that need to be approved overall but the general concept has been approved and I think the new owner is going to take a long, hard look at that and see whether he or she can use that as a stepping stone to improving the stadium and making it a year-round destination at some point.”

The Stadium District’s Master Plan proposes a 58-acre, mixed-use neighborhood that has the potential to be a larger version of McGregor’s Square that opened a year ago across the street from Coors Field. The Mile High project seemingly lost momentum during COVID and now sits ready for inspection by the Broncos’ new owner.

Ellis has been the team’s president since 2011 when Broncos owner Pat Bowlen stepped away from his day-to-day responsibilities, and became the team’s CEO in 2014, when it was announced Bowlen had been diagnosed with Alzheimer’s.

In the 11 seasons under Ellis’ leadership, the Broncos seemingly enjoyed unprecedented success financially. On the field, though, his term has a thick line of demarcation laid right down the middle. The first five seasons brought five consecutive AFC West championships, two Super Bowl appearances and one Lombardi Trophy. Then after a non-playoff, 9-7 season in 2016, the Broncos suffered through five consecutive losing seasons, the franchise’s longest drought in 50 years.

“Yeah, the last five years are the ones you remember, sadly for me,” Ellis said. “I’m very disappointed in the ways those went, obviously, and who isn’t? I think our fans reached a boiling point and now with the addition of coach (Nathaniel) Hackett and the addition of one more year experience of getting to know George Paton, Russell Wilson on board, I feel like the team’s in a good spot.

“But I’m like what George told you yesterday, ‘I’m a 7-10 GM.’ So before we start anointing anybody around here let’s see if we can get it done on the field. …I don’t judge my own performance. You all can do that and I don’t have a problem with it. I do think the organization is in a good place for the next owner. And that’s not due to me. That’s due to everybody that works there. From our executive team on down.

“We’ve got a good coaching staff in place now. I think George is the real deal. I think he’s somebody who is going to bring success to the organization for a long time. So, I’m optimistic about the Broncos.

Ellis and his wife Ann have built a home in Maine. But they’re not retiring there come fall.

“No, no, no. I’m going to go to all the games,” Ellis said. “And sit in the stands and you know, razz the coach and his game plan.”

As a top executive, Ellis has always lived and died with the Broncos on game days.

“I love this team, I love the region and I love Colorado and I can’t wait to be a fan. I’m sort of a fan, anyway. I can’t wait to actually slip on some orange and head down to the stadium. Tailgate with my kids and have some fun. Yeah, I’m looking forward to it.”

> Top stories curated daily just for you! Sign up for the 9NEWSLETTER to get can’t-miss stories, Next and Broncos content, weather and more delivered right to your inbox.

MORE WAYS TO GET 9NEWS

HOW TO ADD THE 9NEWS APP TO YOUR STREAMING DEVICE

ROKU: add the channel from the ROKU store or by searching for KUSA.

For both Apple TV and Fire TV, search for “9news” to find the free app to add to your account. Another option for Fire TV is to have the app delivered directly to your Fire TV through Amazon.