The Royal family has shared the fifth photograph in a 70-day picture countdown to the Queen’s Platinum Jubilee celebration weekend.

Posting a photo of the Queen at the Trooping the Color ceremony in 1956 to Instagram, it’s the latest in the series of photos which each represent a year of the monarch’s seven-decade reign.

In the photograph, Her Majesty can be seen leading members of the army along Horse Guard’s Parade in Whitehall. 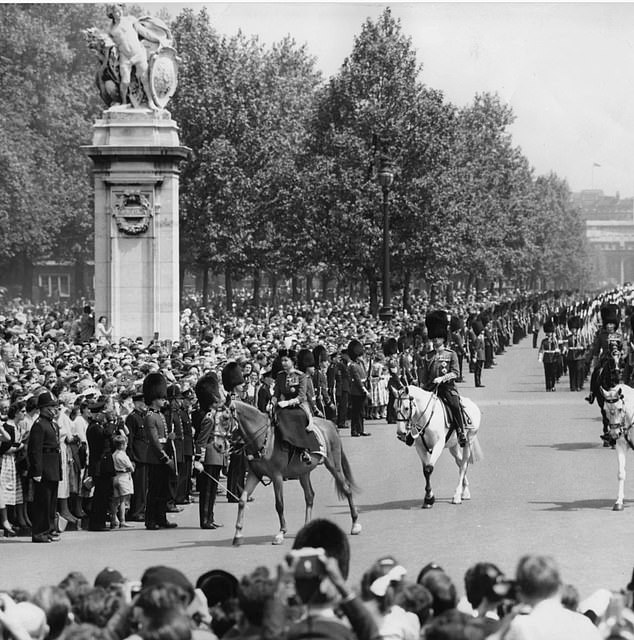 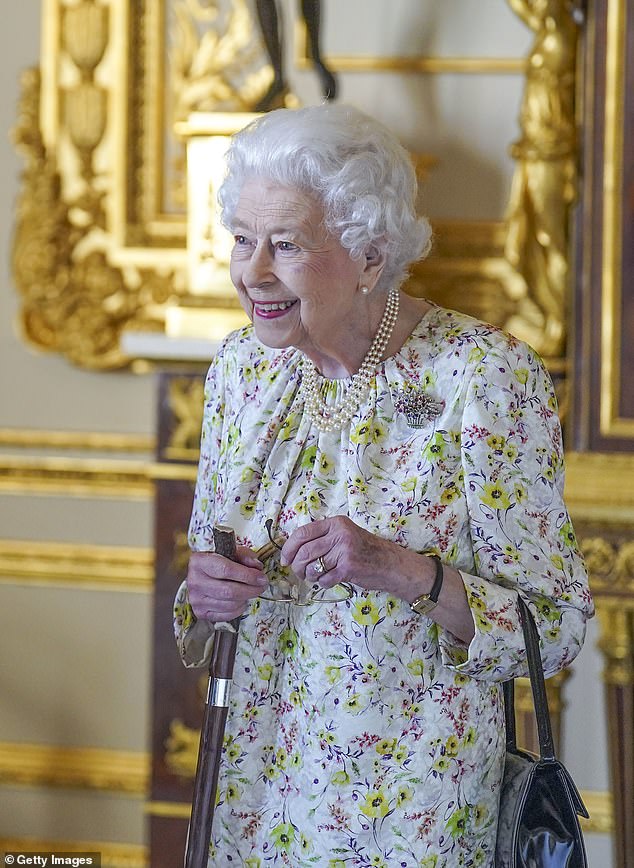 In recent years, the Queen has continued this tradition in a carriage instead of horseback.

‘Also known as The Queen’s Birthday Parade, the ceremony has marked the official birthday of the British Sovereign for over 260 years.’

The account also shares another moment from history alongside each post, and today it gave a nod to another royal family, writing: ‘In 1956, Prince Rainier III of Monaco married the American film actress Grace Kelly.

Last week, the palace announced the photo project, saying: ‘Over the next 70 days, as we countdown to the #PlatinumJubilee Celebration Weekend, we’ll be sharing an image a day of The Queen – each representing a year of Her Majesty’s 70 -year long reign.’

Commenters on the post were quick to shoe their admiration for the queen by sending a flurry of love hearts.

The first photograph in the series depicted the Queen’s coronation at Westminster Abbey, in 1953.

In the black and white image, Her Majesty can be seen seated on the Coronation Chair, wearing the St. Edward Crown and carrying the Sovereign’s Scepter and Rod.

The Queen marked 70 years on the throne on February 6, 2022, making her the longest reigning monarch in British history, and weekend of celebrations will be held from 2nd to 5th June to commemorate the milestone.

However, it’s not clear to what extent the Queen will be able to take part in public celebrations, due to mobility issues which have curtailed her public appearances in recent weeks, and reports that she’s relying on a wheelchair. 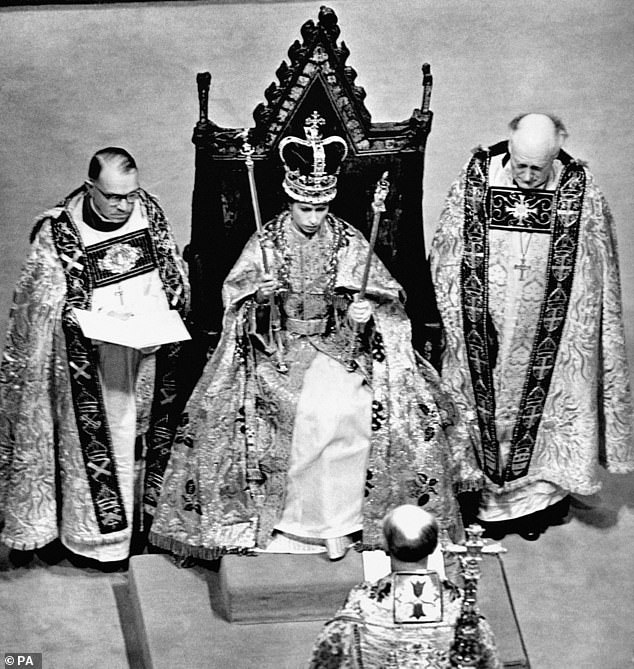 The Coronation of Queen Elizabeth II, at Westminster Abbey, in 1953, with Her Majesty seated on the Coronation Chair wearing the St. Edward Crown and carrying the Sovereign’s Scepter and Rod 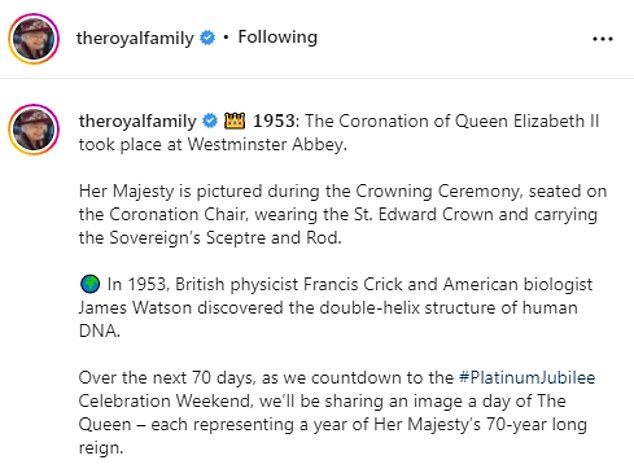 At an official engagement at her Windsor Castle home last week, The Queen was all smiles as she stood with her walking stick.

The monarch currently in residence at Windsor Castle – was pictured wearing half-moon glasses to examine luxury artefacts by British craftwork firm Halcyon Days, which is held in high esteem by the royal family and has three Royal Warrants.

The official engagement marked the Queen’s first in-person visit with a significant group of attendees since her pre-Jubilee reception last month when she was joined members of the local community in the Sandringham House ballroom in Norfolk.

The 95-year-old monarch was due to visit the Halcyon Days factory in Staffordshire in 2020 to mark its own Platinum Jubilee of 70 years, but plans were put on hold when the pandemic struck – instead she was visited at her home on Wednesday. 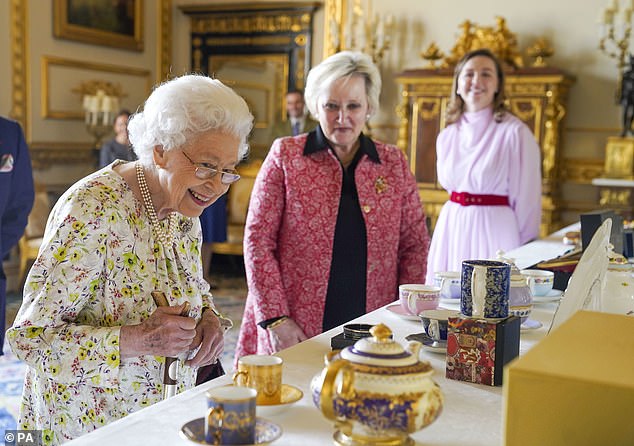 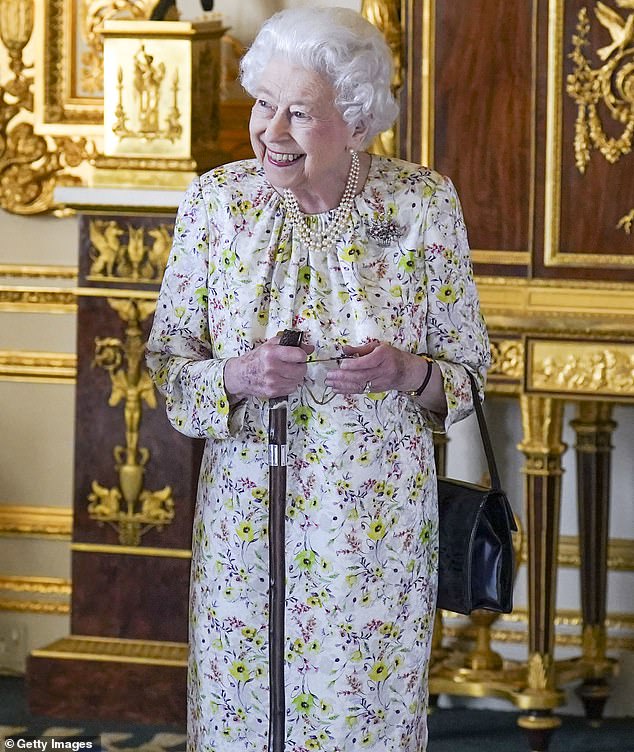 The Queen, 95, now uses a walking stick, confessing to mobility problems, and usually carrying out only light duties at Windsor

Her next big upcoming event is the Duke of Edinburgh’s memorial service on Tuesday.

The service will ‘give thanks to his dedication to family, nation and Commonwealth and recognize the importance of his legacy in creating opportunities for young people, promoting environmental stewardship and conservation, and supporting the Armed Forces’.

However, the palace has yet to confirm whether the Queen will be present at the service, with a source saying that she still ‘hopes to attend’.

The Sun on Sunday previously reported that Buckingham Palace is planning a ‘military-style’ operation to ‘get the Queen to attend her late husband’s memorial service while keeping her out of view from paparazzi’.

The monarch is expected to be flown 15 minutes by helicopter from Windsor Castle to Buckingham Palace for the event and will then be driven the short distance from the Palace to Westminster Abbey, sources have claimed.

One source told the Mail on Sunday that Her Majesty does not want to be seen in public in a wheelchair over fears of replicating a ‘haunting’ photo taken of her late sister Princess Margaret in the months before her death.

It comes after the Queen pulled out of the Commonwealth Day service last week over concerns for her ‘comfort’ on the 60-mile trip, and whether she could manage having to sit in Westminster Abbey for more than an hour.

Her biographer Robert Hardman also revealed on Wednesday to GB news that Her Majesty was in ‘very good spirits’ amid recent reports that she is relying on a wheelchair. 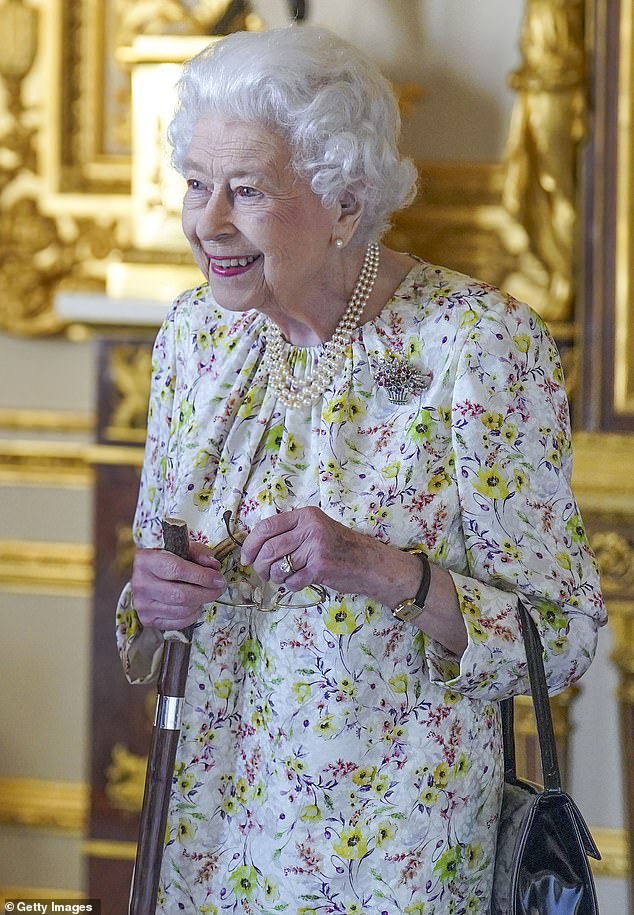 Her Majesty appeared in high spirits as she viewed the display of artefacts from British craftwork company, Halcyon Days 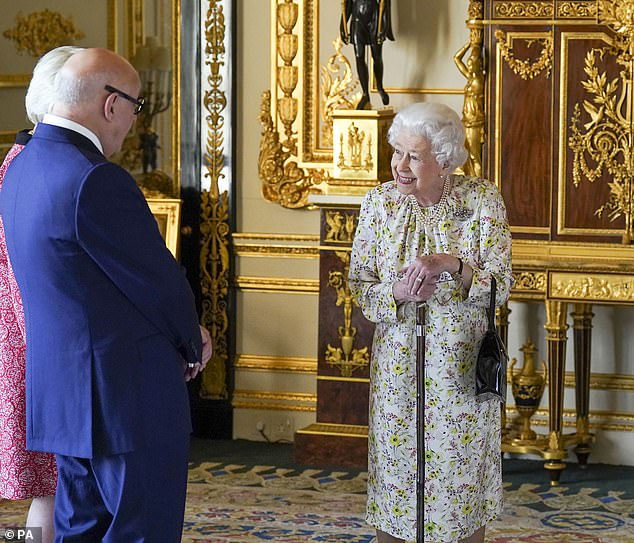 Perched on the crook of the Queen’s left arm was her trademark black patent Launer handbag, and she also held her walking stick as she stood to look at the display

He continued: ‘But, but there is a mobility [issue] inevitably when you’re coming up to your 96th birthday and also dignity, I think it’s terribly important.

The entertainer said it was ‘very sad’ but that he hoped she’d be well enough to enjoy the upcoming anniversary celebrations.

He said: ‘I have heard that the reason she’s not doing a lot of the events that she should be doing and canceling them is because she is in a wheelchair. She doesn’t want to be seen because she’s very proud.’

The Queen and Philip’s second son Prince Andrew is planning to be present at the thanksgiving service next week, despite him paying an estimated £12million earlier this month to settle out of court in a US civil sexual assault case with accusing Virginia Roberts.

But Prince Harry will not travel to the UK for the service amid ongoing legal action that he is taking against the Home Office over Metropolitan Police protection, which he believes he should still be entitled to when in the UK, despite quitting royal duties and moving to California. His spokesman said earlier this month that he ‘plans to visit the Queen, his grandma, as soon as possible’ but there has been no confirmation of when this might be.

Other Royal Family members expected to be in attendance next Tuesday include Prince Charles; Camilla, Duchess of Cornwall; Prince William; Kate, Duchess of Cambridge; Prince Edward; and Sophie, Countess of Wessex.