Kylie Jenner and Travis Scott have been seen together in public for the first time in five months. The pair have been staying near home after his Astroworld concert tragedy in Houston, Texas killed 10 people in November, 2021.

The power couple – who do not live together – took the day off on Sunday to have some fun with their eldest child Stormi Webster at Disneyland in Anaheim, California. Their second child, born on February 2, 2022, was not seen.

Both Jenner, 24, and Scott, 30, stuck with an all dark colors but their daughter, aged four, was dressed in brighter colors as she seemed to be thrilled over the rides, toys and fun foods the world famous park had to offer.

The happiest place on earth: Kylie Jenner and Travis Scott took the day off to have some fun with their eldest child Stormi Webster at Disneyland in Anaheim, California this weekend 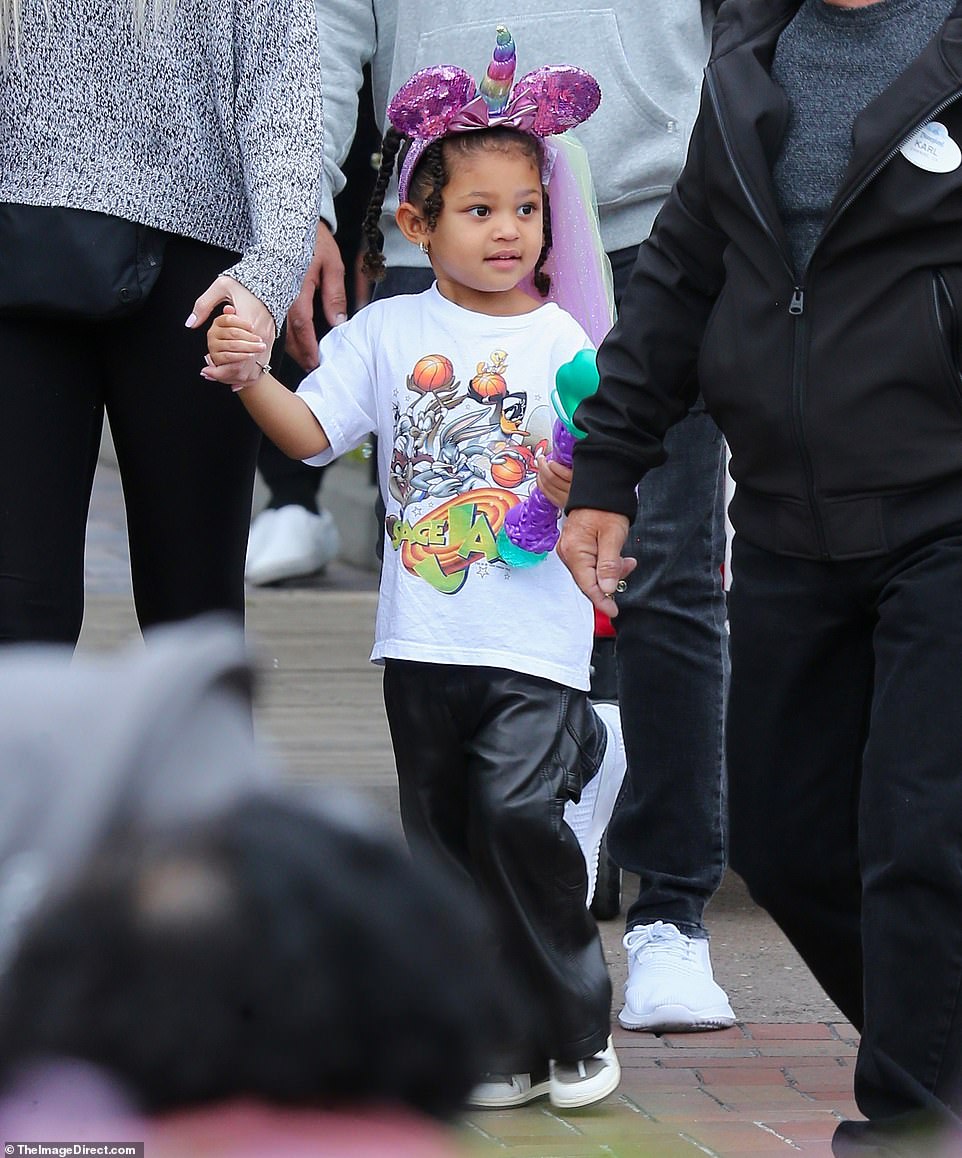 Baby S! Her mini-me daughter was dressed in brighter colors as she seemed to be thrilled over the rides and fun foods at the world famous park

While in the Disney park, the family seemed to be going for comfort.

Kylie had on black hoodie jacket that was zipped up due to the unusual cold weather in Southern California this month.

The Keeping Up With The Kardashians star added wide-legged jeans with pockets on the sides that showed off her post baby body; it was only two months ago that she welcomed her second child.

And the Life Of Kylie added comfortable sneakers in white, blue and gray.

The cosmetics mogul had a black purse worn around her body as her raven hair was down over her shoulders. The cover girl had on minimal makeup but her long light pink nails were perfectly polished. 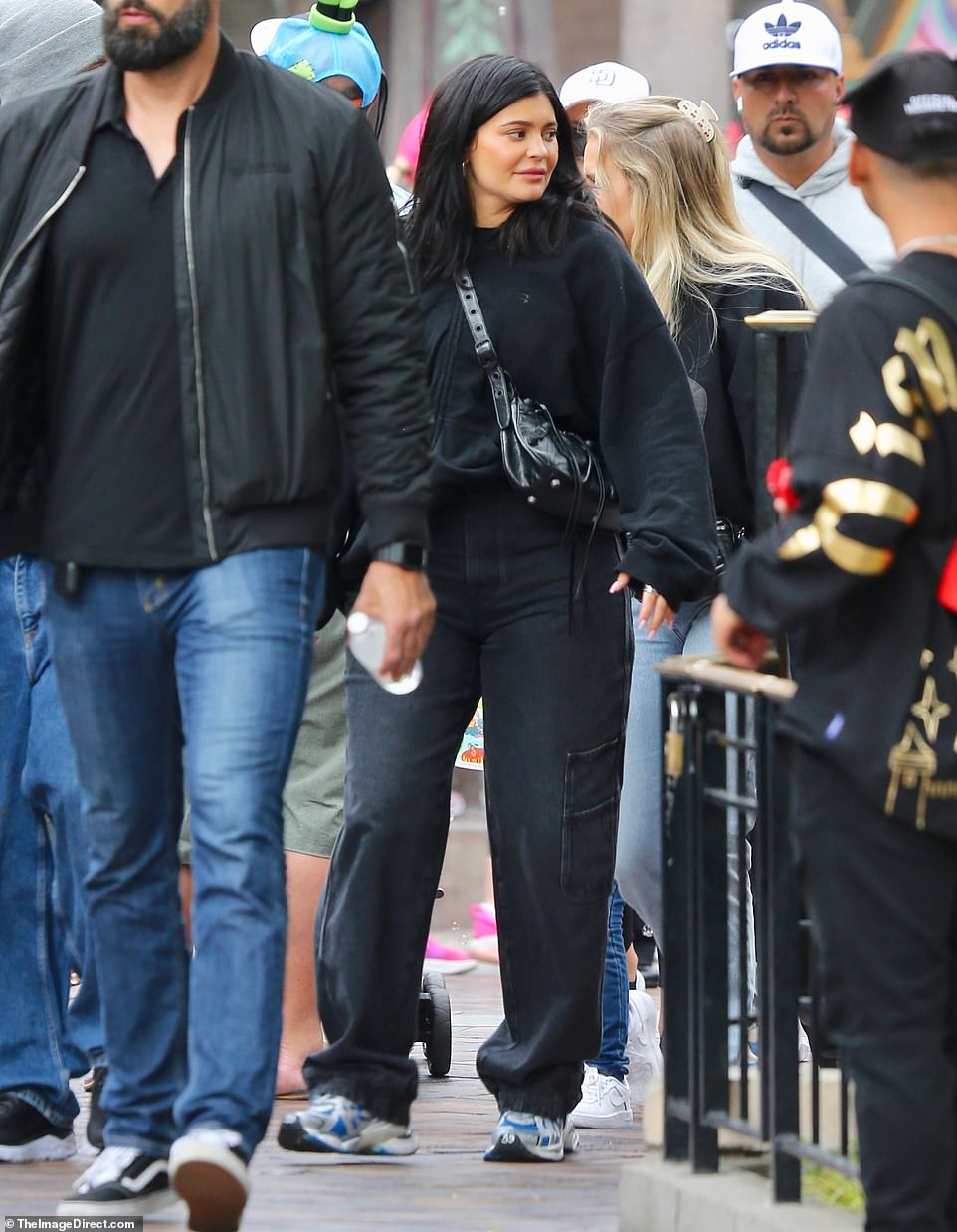 Surroundings! Mom Kylie was seen with several friends and bodyguards as well as a Disney hired staffer to lead the pack

Her look: Kylie had on black jacket that was zipped up due to the unusual cold weather in Southern California 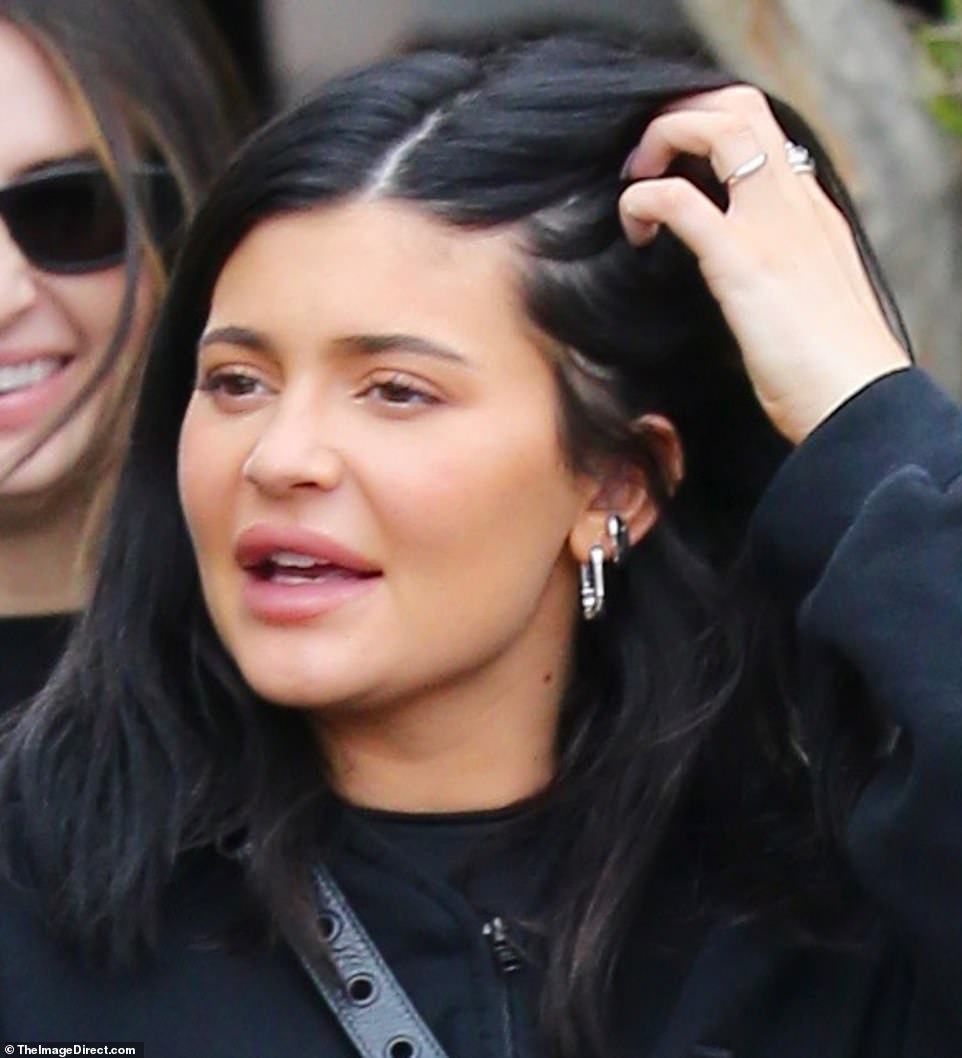 Fresh face: The beauty mogul opted for a simple make-up look for the family outing

Travis had on a black top and cap with diamond earrings as he was seen with friends.

And little Stormi wore a Space Jam T-shirt with black leather slacks and white sneakers. The sweet child also had on Minnie Mouse ears in light purple with a unicorn horn in the center.

Mom Kylie was seen with several friends and bodyguards as well as a Disney hired staffer in plaid to lead the pack.

Jenner looked to be in good spirits as she wore a little bling like hoop earrings and a band on her wedding finger, as well as other rings.

It is not known if she may be secretly wed or privately engaged to rap Travis who hails from Texas. 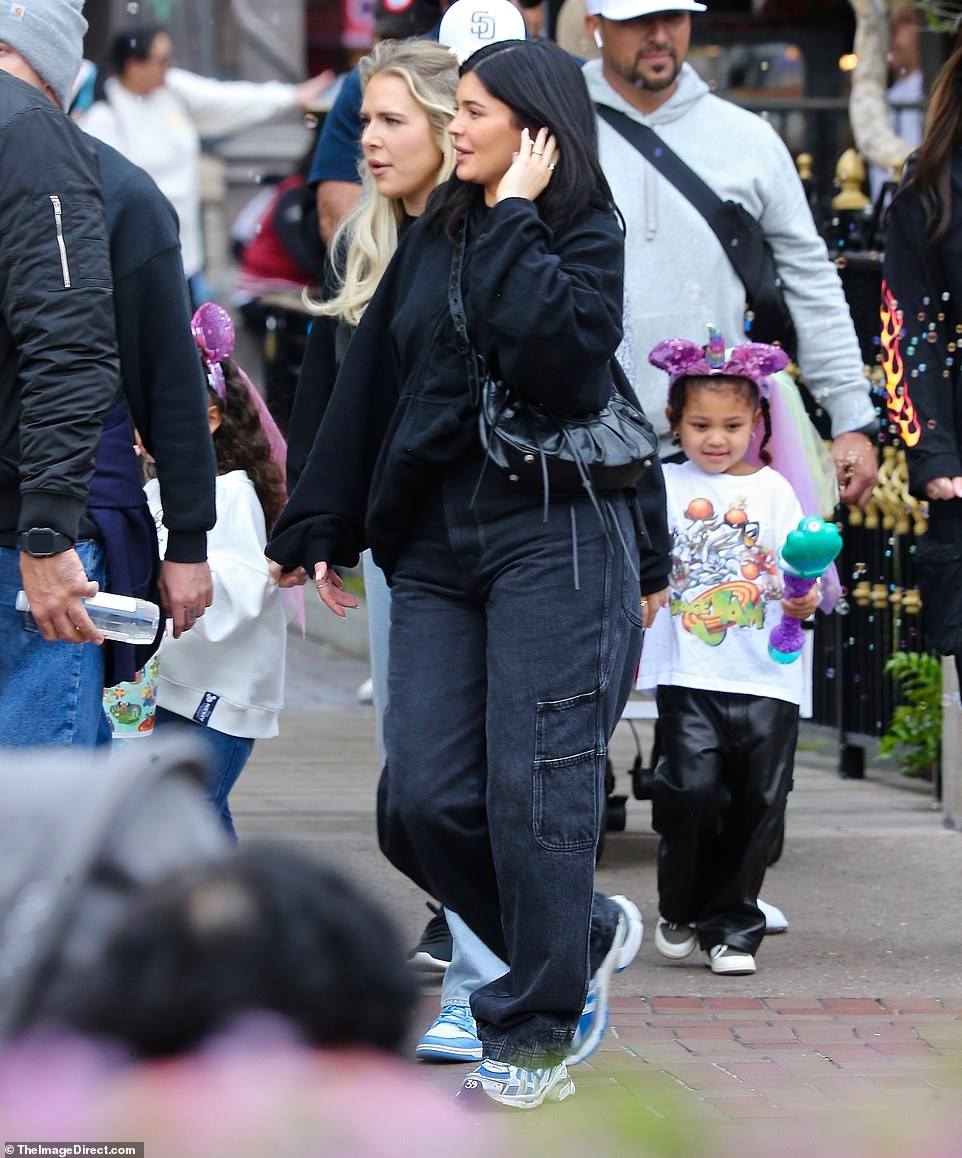 In the mood for jeans: She added wide legged jeans that showed off her post baby body. And the Life Of Kylie added comfortable sneakers. The cosmetics mogul had a black purse worn around her body as her hair was down over her shoulders

Not seen was Kylie’s new son, whose name was first Wolf, but they have decided to change it.

They have not released the new name yet.

This sighting also comes just as it was claimed on Monday by TMZ that Kanye West has pulled out of the music festival Coachella, months after he was banned from the Grammys for his concerning online behavior and attacks against ex-wife Kim Kardashian and her boyfriend Pete Davidson.

The rapper is said to have made the decision himself to bow out from the two weekend event, that kicks off next Friday in at the Empire Polo Club in Indio, California.

Travis was said to be appearing with Kanye – who has changed his name to Ye – and will also no longer feature at the festival, TMZ reported.

This is a rare sighting for Travis and Kylie who have stayed under the radar ever since there were 10 deaths at Travis’ Astroworld concert in Houston in November. 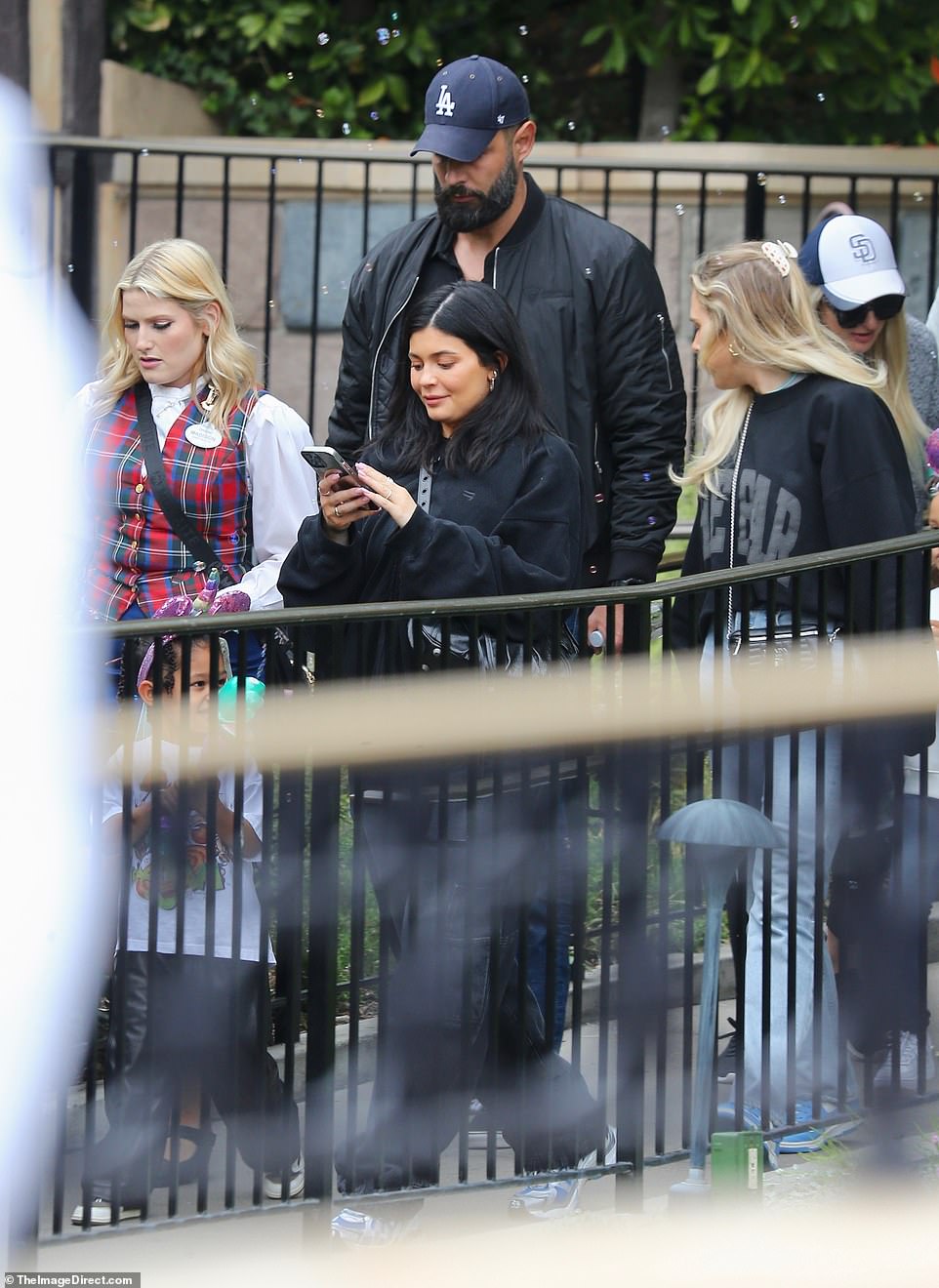 Married? Jenner looked to be in good spirits as she wore a little bling like hoop earrings and a band on her wedding finger

Scott was last seen in public this weekend at a pre-Grammy party in Los Angeles. The rapper stepped out in a brown coat with a thick silver necklace hanging loosely as he left the party, which was thrown by Mike Dean and Jeff Bhasker.

Before that, he had performed on Oscar night in late March.

The rapper gave a short performance at Darren Dzienciol and Richie Akiva’s Oscars party at their Bel-Air home, TMZ reported.

The father-of-two is said to have rapped and DJ’d for A-List attendees, including Leonardo DiCaprio, Tobey Maguire, and Venus and Serena Williams.

Travis has kept a relatively low profile since the crowd surge that left hundreds injured and 10 people dead at his own festival in Houston, Texas, in November.

The Sicko Mode hitmaker was dropped from headlining Coachella following the tragedy. 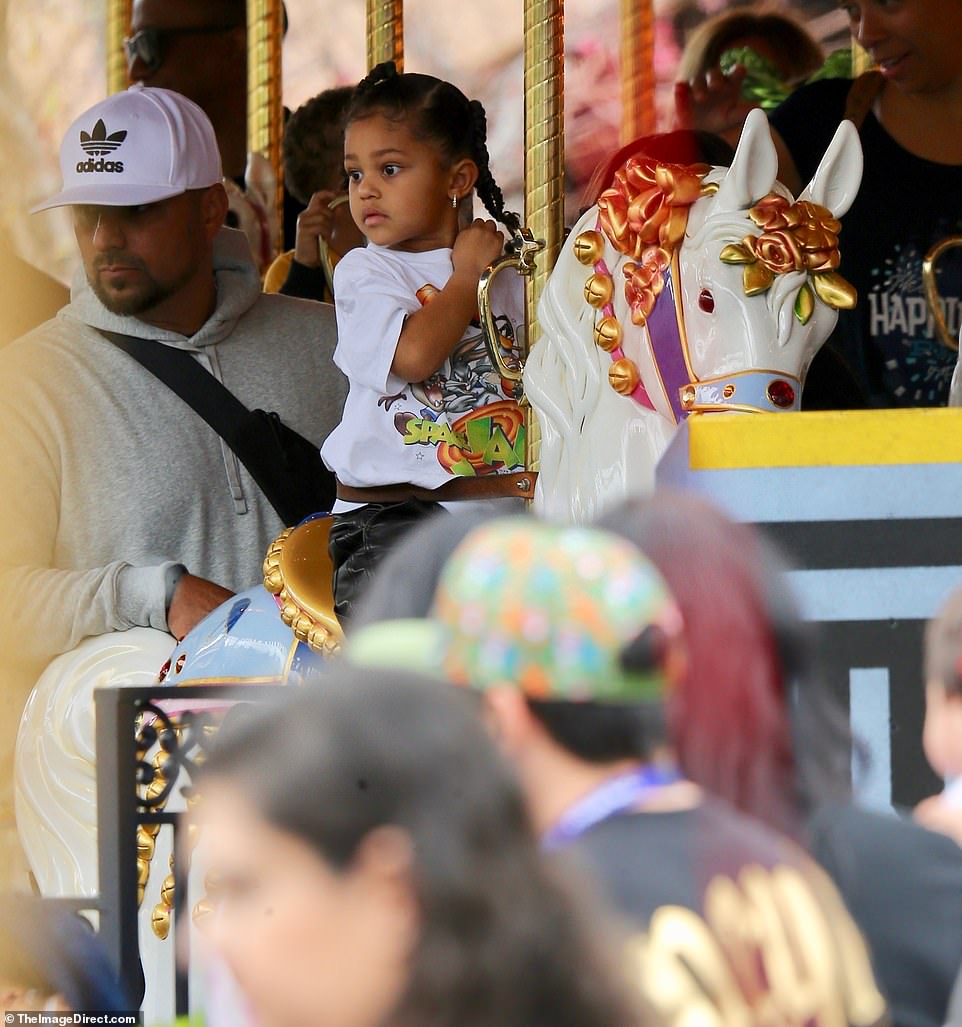 She went on the rides, too: Stormi was seen seated on a horse during a carousel ride in the park’s Fantasy Land

What’s more, the families of several victims have pursued legal action against Travis, as well as Live Nation, the company who organized the event.

Shortly after the incident, 282 victims of the concert filed a $2 billion lawsuit against Travis, support act Drake, Live Nation, Apple Music and NRG Stadium — where the event was held — claiming they ‘cut corners, cut costs, and put attendees at risk’.

While a further 125 victims — including the family of 21-year-old Axel Acosta Avila, who died at the gig — filed a $750 million lawsuit for loss of mental and physical health and loss of human life.

There was also a lawsuit from two concert security guards — Jackson Bush and his uncle Samuel Bush — who are seeking $1 million after claiming organizers of the event put ‘greed’ before safety.

And the family of the tragedy’s second-youngest victim, 14-year-old John Hilgert, filed their own lawsuit against Travis, Live Nation, and several others involved in the concert for $1 million, citing ‘gross negligence’ and ‘reckless disregard’ for people’s safety. 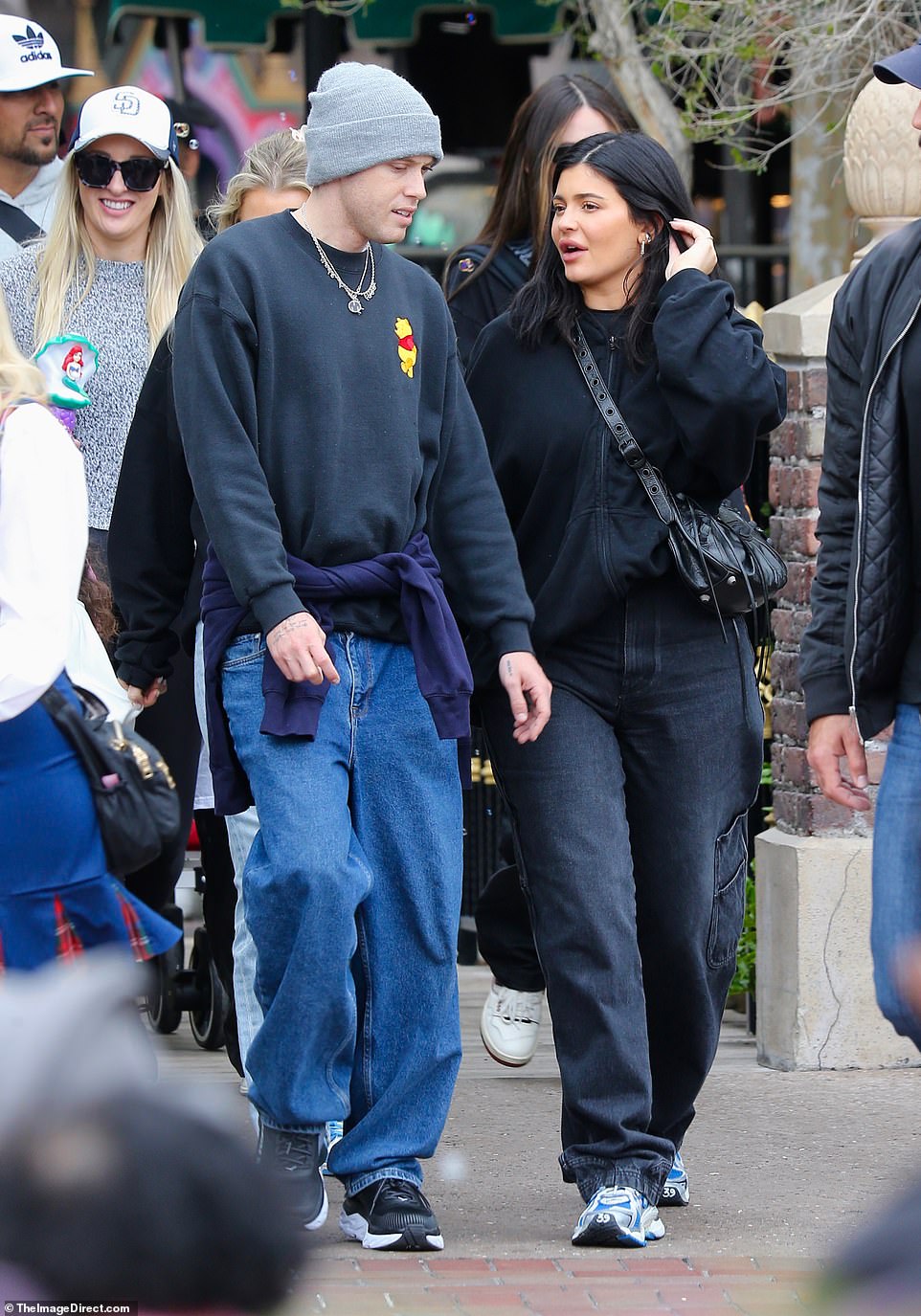 So rare: This is a rare sighting for the couple who have stayed under the radar ever since there were several deaths at Travis’ Astroworld concert in Houston last year; here Kylie is speaking with friend Harry Hudson