Jada Pinkett Smith ‘wishes’ Will Smith ‘didn’t get physical’ with Chris Rock, but isn’t ‘angry with’ her husband after he slapped comedian Chris Rock for making a joke about her at the Oscars, a source claims.

Smith smacked the comedian in the face after he made a joke about his wife’s hair loss. Pinkett Smith has been open about her struggle with alopecia, a disease which often causes bald spots.

The couple is apparently ‘in agreement’ that Smith ‘overreacted’ and are ‘all about their family and their kids’ as Whoopi Goldberg, a governor of the Academy Awards, yesterday said she doesn’t believe his career will be marred by the slap . 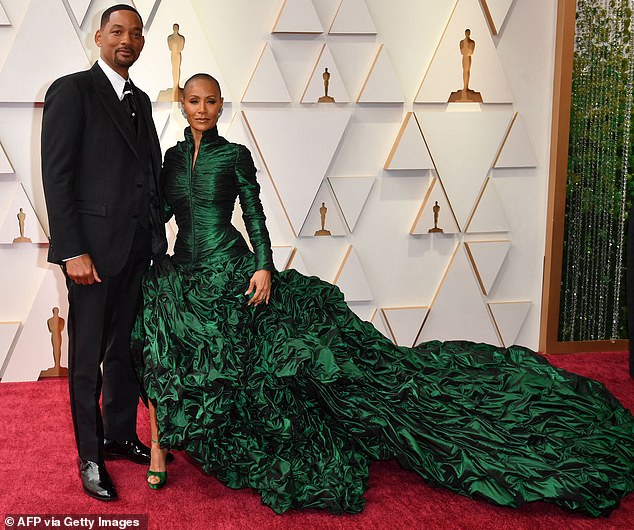 Jada Pinkett Smith ‘wishes’ Will Smith ‘didn’t get physical’ with Chris Rock, but isn’t ‘angry with’ her husband after he slapped comedian Chris Rock, a source claims

Speaking to Us Weekly, an unnamed insider said: ‘It was in the heat of the moment and it was him overreacting.

‘He knows that, she knows that. They’re in agreement that he overreacted.’

They also alleged that Pinkett Smith is ‘not a wallflower’, nor ‘one of these women that needs protecting’.

‘He didn’t need to do what he did,’ they added.

The US Weekly source also said that the couple ‘are very much protected in their own lives and do the absolute best they can to protect their loved ones’.

Dailymail.com has reached out to Jada Pinkett-Smith’s representative for comment.

It comes as a report claimed bosses at Smith’s talent agency, Creative Artists Agency (CAA), were divided over what to do with the Oscar-winner following his shocking on-stage slap.

The incident was said to have pushed CAA chiefs Bryan Lourd, Richard Lovett and Kevin Huvane, who represent countless A-list stars throughout media and sports, into a quandary: their bankable star was a pariah, despite picking up the industry’s biggest award. 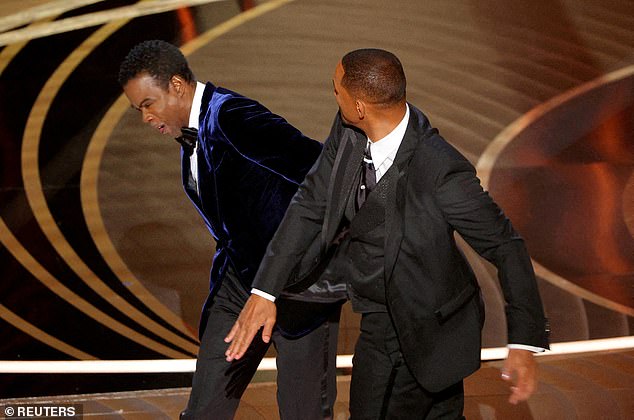 According to an account of the incident’s aftermath in The Daily Beast, which was denied by the agency, a furious debate took place within the agency over whether Smith should be dropped.

The discussion even spilled over into a leadership retreat last week at the luxury oceanfront Terranea Resort in Rancho Palos Verdes, California, which saw about 100 agents and talent executives gathered at the property – the industry’s first large gathering since the pandemic.

Also impacting the agency’s decision is its prior association with disgraced producer Harvey Weinstein – a negative connection that executives are actively seeking to distance themselves from.

Lourd reportedly wanted to remove Smith from CAA’s roster. Lovett, meanwhile, wanted to keep Smith on board – though he appeared ‘frazzled’ by the entire episode and subsequent fallout, insiders told the publication.

It appears that Lovett came out on top and that Smith will remain with the agency for now.

A spokesperson for CAA denied any divisions within the agency’s ranks, telling The Daily Beast: ‘There is no truth to any of it. Simply never happened.’

But as questions are raised about Smith’s future, others don’t think his career will, or should be, marred by the incident.

Speaking on The View yesterday, Whoopi Goldberg said: ‘Some of Will Smith’s future projects are in question. The question is does he have a path back – yes of course he does.

Goldberg – who is the first African American to have received Academy Award nominations for Best Actress and Best Supporting Actress – added that ‘you have to’ separate the art from the artist ‘because if you can’t, none of us can be artists’ .

Co-host Ana Navarro also weighed in on the issue, saying: ‘I’m so tired of talking about it, I’d like to slap myself.’

She said Smith’s career shouldn’t be defined by the incident, because ‘he’s had over 30 years of a career, where he’s had a very positive image, been a positive role model, he’s been very philanthropic, he’s done all sorts of things’ . 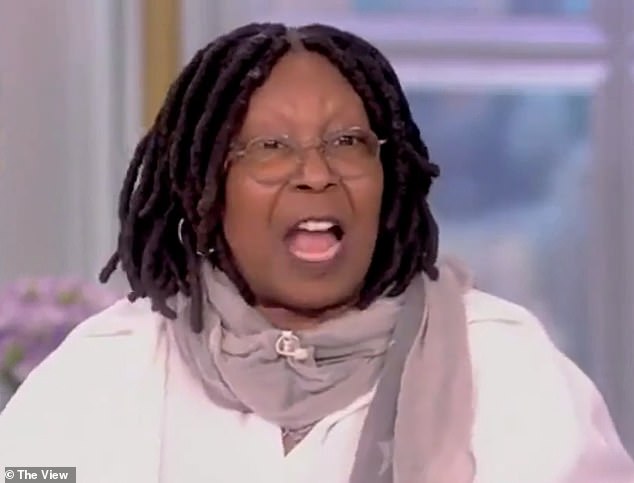 Speaking on The View, Whoopi Goldberg said: ‘Some of Will Smith’s future projects are in question. The question is does he have a path back – yes of course he does’

In the aftermath of the slap, Goldberg insisted that Smith won’t have his Oscar taken away from him after he broke the Academy’s code of conduct.

She had gone on to defend Will’s actions, reasoning: ‘sometimes you behave badly’.

Goldberg added: ‘I think it was a lot of stuff probably built up. I think he overreacted… I think he had one of those moments where it was like [God damn] it, just stop.

‘I get it, not everybody acts the way we would like them to act under pressure. And he snapped…

‘Sometimes you get to a point when you behave badly. I myself have behaved badly on occasion.’

Smith – who took exception to Rock’s joke about his wife’s shaved head, a result of alopecia – also announced his resignation from the Academy of Motion Picture Arts and Sciences, saying he had ‘betrayed’ its trust.

Now the star, who won this year’s Best Actor award for his portrayal of Richard Williams, father of tennis stars Venus and Serena, in King Richard, is unlikely to be invited to announce the Best Actress award next year – a task performed in recent years by the previous year’s Best Actor.

One Academy member said: ‘Some of the members are saying Will jumped before he was pushed. The executives are still in utter disbelief at what happened.’

Smith won’t be able to vote for the Oscars or attend special Academy events in the future but he will still be eligible for future Oscar nominations.

‘I am resigning from membership in the Academy of Motion Picture Arts and Sciences, and will accept any further consequences the Board deems appropriate,’ he wrote in a statement.

‘Change takes time and I am committed to doing the work to ensure that I never again allow violence to overtake reason,’ Smith concluded.

The Academy said it would ‘continue to move forward’ with disciplinary proceedings.