A five-year contract worth up to $140 million for Davante Adams after a trade sent him from the Green Bay Packers to the Las Vegas Raiders. Then, a four-year contract worth up to $120 million for Tyreek Hill after the Kansas City Chiefs traded him to the Miami Dolphins. Most recently, Stefon Diggs signed a four-year extension worth $104 million to keep him with the Buffalo Bills through the 2027 season.

All of that is music to Deebo Samuel’s ears. The San Francisco 49ers receiver seemingly reacted to news of Diggs’ deal, as he has to several other receiver contracts before it.

Samuel knows that every high-priced deal that gets done before the 49ers lock up their fourth-year wideout to an extension likely means more money in his bank account. Of course, while Samuel’s new deal may not surpass the top of the market, expecting to sign the dynamic offensive weapon to anything less than $20 million to $25 million annually—possibly more—would be wishful thinking by the 49ers.

Samuel had a breakout year in 2021, though, recording 1,405 receiving yards and six receiving touchdowns. However, that doesn’t tell the whole story. The self-designated “wide back” also recorded 365 rushing yards and eight rushing touchdowns, with the latter being an NFL record for a receiver.

That’s 1,770 total yards and 14 total touchdowns for the receiver-running back hybrid. His versatility may make him even more valuable. He also managed to remain relatively healthy in 2021 despite the heavy workload.

Head coach Kyle Shanahan recently praised his star receiver, responding that he’d “recommend” the 49ers sign Samuel to an extension when asked to share his thoughts on the contract situation.

“I haven’t had anybody like Deebo, ever,” Shanahan added, “someone who is built like him, who is more like a running back with just the way he can take hits and the way his body can deliver a blow. Then you go with his speed, which allows him to be a receiver.

“People don’t realize how smart Deebo is too, and he’s one of the smartest players I’ve been around. Nothing’s too big for him.”

Nobody’s perfect. Did you find a mistake in this article?
Report it.

The NFC West got easier this offseason with the Seattle Seahawks trading quarterback Russell Wilson to the Denver Broncos. According to StatMuse, Wilson is 16-4 against the San Francisco 49ers over his career, including beating his once-division-rival in the last four meetings. He has thrown 36 touchdowns compared to 10 interceptions against the Niners. Kyle Shanahan is 2-8 as a head coach against a Russell Wilson-led Seahawks squad. So it’s no surprise that he’s glad to see the quarterback leave the division. San Francisco’s coach hasn’t escaped Wilson completely, though. The 49ers will travel to

The NFL offseason craziness continued Wednesday as, out of the blue, the Kansas City Chiefs traded star receiver Tyreek Hill to the Miami Dolphins for a massive package of draft selections, which came just a few days after the Green Bay Packers traded their own star receiver , Davante Adams, to the Las Vegas Raiders. In exchange for Hill, the Chiefs received a first-rounder (No. 29 overall), second-rounder (No. 50 overall), two fourth-rounders, and a sixth-rounder, eclipsing the haul that the Green Bay Packers obtained for Adams (a first-rounder and a second-rounder). In addition to the trade, Hill received a record-breaking, four-year, $120 million extension with $72 million in total guarantees and $52 million guaranteed at signing. However, when 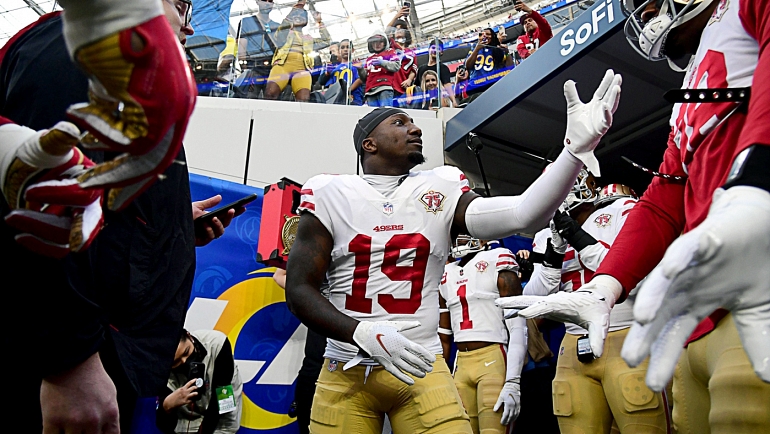 The New York Jets tried to get their hands on wide receiver Tyreek Hill. Then the Miami Dolphins got involved, and head coach Robert Saleh’s squad was left empty-handed. That leaves the Jets focused on potentially adding a receiving threat via the draft. However, Saleh and company are also watching what is happening around the NFL. ESPN’s Rich Cimini reports that the Jets are “keeping an eye” on the situations with the Seattle Seahawks, Tennessee Titans, and San Francisco 49ers (h/t Sasha D. Robinson). “A handful of star receivers are entering the final year of their rookie contract, including DK Metcalf, AJ Brown, and Deebo Samuel,” wrote Cimini. “The market is blowing up, which might make it harder for their teams to re-sign them.” Obviously, the 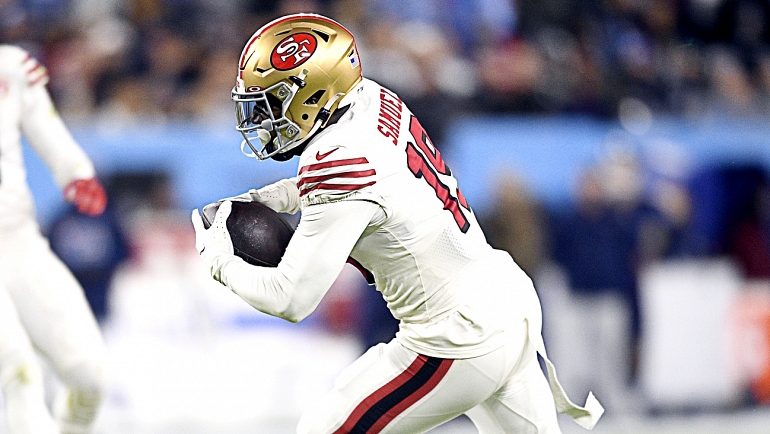 49ers have a plan to ensure Deebo Samuel, Nick Bosa remain for ‘a long, long time’

After a week of rumors revolving around the interest in San Francisco 49ers wide receiver Deebo Samuel this week, general manager John Lynch reiterated his firm intentions that both Samuel and star defensive end Nick Bosa would receive extensions and remain 49ers for the foreseeable future. Speaking at the NFL’s annual league meeting, Lynch said there’s been “good communication” with both players’ camps, continuing that there’s “a plan for each of those guys,” as he stated earlier in the offseason following the season. “[Bosa and Samuel] are gonna be a part of us for a long, long time,” Lynch said. On