The start of the 2022 MLB season has finally arrived!

Beginning with seven Opening Day games on Thursday and continuing with the rest of MLB in action Friday, it’s time to welcome in a new year on the diamond. To celebrate baseball’s return, we’ve asked our experts to weigh in on what they are most excited to watch — and make a fearless Opening Day prediction.

Once the games begin, be sure to refresh this page early and often for our live updates and takeaways from every Opening Day game on both Thursday and Friday.

Opening Day predictions and what we can’t wait to see

What’s the one thing you are most excited to watch on Opening Day?

Bradford Doolittle: I’m in Minneapolis for a Twins-Mariners series that was pushed back a day because of some inhospitable early spring weather. The upside is that I get two Opening Days and can watch the debut of Bobby Witt Jr. in Kansas City on a screen of some sort Thursday before getting to see Seattle’s Julio Rodriguez firsthand on Friday. We haven’t always seen the most exciting prospects on Opening Day (Witt is No. 2 and Rodriguez is No. 3 on Kiley McDaniel’s top 100 prospect list), so this is a wonderful thing. A great American League Rookie of the Year race is on.

Jesse Rogers: The debut of Cubs rookie Seiya Suzuki. He’s a multiple-tools player with power to all fields and a rocket of an arm. As noted in the recent collective bargaining agreement battle, most rookies don’t make a lot of money — but Suzuki signed a five-year, $85 million contract this offseason, so eyes will be on him throughout the baseball world. He has a chance to be the next big star on a team suddenly void of them. Thursday is his first chance to show fans across the city of Chicago what they’re getting.

David Schoenfield: The most fascinating team to watch in April might be the Padres. There is a lot of pressure on a team that now runs one of the highest payrolls in baseball and is coming off a losing season. They collapsed down the stretch, and while the rotation is healthy again, the Padres will have to play a couple of months without Fernando Tatis Jr. So on Opening Day, I want to see how Yu Darvish looks after going 1-8 (6.16 ERA ) in the second half. I want to see how new manager Bob Melvin sets up his late-game bullpen. I want to see if Ha-Seong Kim can not only fill in for Tatis but hit like he did in Korea after struggling in his debut season. I want to see which Manny Machado shows up. The Padres begin with 14 games against the Diamondbacks, Giants, Rangers and Pirates — a golden opportunity to get off to a hot start and put 2021’s disappointment behind them.

​Joon Lee: I’m with David on this one. The Padres are at a fascinating inflection point in the tenure of AJ Preller with the injury of Tatis and the level of financial investment in this team’s core. According to multiple sources, the Padres club chemistry suffered under Jayce Tingler, so the addition of Melvin will completely shake up the team’s locker room dynamics. I’m interested to see which Darvish shows up on Opening Day and how to form Cy Young winner Blake Snell fares in his second season in San Diego after struggling to put up numbers akin to his tenure in Tampa Bay. Especially after the trade for Eric Hosmer fell through and Tatis’ injury, the team will need its high-salary players to play better in 2022.

Buster Olney: I’m in Atlanta, and I’ll be fascinated to see the reception for new first baseman Matt Olson — and I’d expect that it will be loud and lasting. If anybody is going to replace Freddie Freeman at first, Olson is the perfect candidate given his local roots, his age, his power. If the Braves’ magic script from last year’s World Series is still in play, then Olson will get a pivotal hit — and the Atlanta fans will go wild. What a story that would be.

Coley Harvey: I am beyond excited to be joining Buster in my hometown of Atlanta, where I’ll have a front-row seat for a coronation that’s been a generation in the making. And as a lifelong supporter of all things ATL, 404, Chick-fil-A and Waffle House, the 10-year-old inside me still can’t believe one of the pro teams from his city is finally about to have another banner- raising night. The Braves’ 1995 and 2021 championships and Atlanta United’s MLS title in 2018 are all we’ve got! After the 28-3 memes and jokes, the City Too Busy To Hate more than deserves to celebrate last October’s World Series win one more time. Atlantans have earned it.

Alden González: I’ll be at Angel Stadium on Thursday, and because of that I’ll be the luckiest of us all. Shohei Ohtani will be on the mound and he will be in the lineup, beginning what promises to be another enthralling season as a two-way player. The talk around Angels camp this spring centered on whether Ohtani can actually be better this year, given how he improved as a pitcher and how he grew comfortable with the two-way role as the season progressed. It sounds impossible — until you realize how special this man is.

Tim Keown: The Mets got Max Scherzer to team with Jacob deGrom, and they’re Opening Day starter is … Tylor Megill. Next to the Pirates’ JT Brubaker, Megill is the most non-Opening Day starter on Opening Day. Even Oakland has Frankie Montas, even though there’s a chance he could be traded before Friday’s first pitch in Philadelphia. This might not mean a whole lot — Scherzer is supposed to be back soon, maybe even for the second game — but is sure feels like an omen.

It’s time to call your shot: What is your one Opening Day prediction that will definitely come true?

Doolittle: Albert Pujols is going to homer in St. Louis. Even if it turns out to be the only homer he hits all season, there is no way this doesn’t happen. There are a lot of young Cardinals fans in St. Louis who have only heard about Pujols from their parents. It’s tremendous that they get to experience him this year as he moves on from a Hall of Fame career.

Rogers: Corbin Burnes will one-hit the Cubs — and Suzuki will be the only hitter to get to him. Chicago has little left-handed pop, while right-handed opponents compiled a miniscule .179 batting average against him in 2021. With a right-handed-hitting player at first base and right field — two positions often reserved for lefty power hitters – – the Cubs will be at a disadvantage against top righties all season. Trying to hit against Burnes on Thursday, in 40 degree weather, will make things that much more difficult.

Schoenfield: Machado got off to a slow start in 2021, but with Tatis out, the Padres need him to hit from the get-go. He hasn’t hit Diamondbacks starter Madison Bumgarner that well during his career (.212/.257/.515), although three of his seven hits off him are home runs. I say he goes yard twice off MadBum as the Padres win their opener. 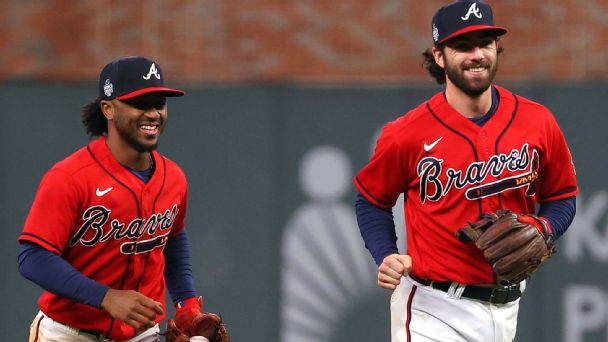 Opening Week is here! You can watch the 2022 season begin with a schedule featuring some of baseball’s biggest names.

Olney: He’s not pitching on Opening Day, but I’ll call that this will be the last year that future Hall of Famer Jacob deGrom is with the Mets. Steve Cohen has demonstrated he’s ready and willing to invest in any way he feels can help the Mets, but there are just too many variables involved for deGrom to return — the questions about his health now, his health moving forward, and most importantly, what he wants. We’ll look back at his assertion that he’s opting out of his contract in spite of his recent injury as the first true signal that he’s headed elsewhere.

González: Rodriguez and Witt Jr. will each hit home runs in their major league debuts. The two highlight what looks like an incredibly deep AL Rookie of the Year field, along with Spencer Torkelson. Eventually Adley Rutschman and Riley Greene will join them. Not included in this list: Wander Franco, who exceeded his rookie eligibility last year but will play in his first full season in 2022. He might be the biggest star of them all. The young talent in the sport is amazing right now — and I only accounted for one league.

Keown: We’ll all be reminded that Mike Trout not only exists but remains the best player in the sport. The eyes of the game will be on Shohei Ohtani to start the Angels’ opener against the Astros, but by the end of the fourth or fifth inning, it’ll be Trout’s night.

Lee: Shohei Ohtani will come out of the gates strong on Opening Day, showing that last year wasn’t a mirage and that it’s possible to pitch and hit at a high level across multiple seasons — and opening up the idea that teams could potentially develop more two-way players, not necessarily at the level of Ohtani, but to maximize the value of every roster spot.

Harvey: OK, so Austin Riley’s Grapefruit League showing wasn’t the strongest (.214, 6-for-28), but I’m banking hard on him having a big opening night. This will happen in what will be his first game at Truist Park since the World Series. At home last postseason, he hit .419 (13-for-31) with five extra-base hits. He’ll tap into that hitting success again in front of another raucous and frenzied Atlanta crowd, giving fans some late-inning magic.