Peter Thiel, the libertarian tech investor, challenged some of the most powerful US financial figures on Thursday over their criticism of bitcoin, accusing them of trying to suppress what has become a powerful political movement.

Thiel, who made his name as an outspoken contrarian and early investor in Facebook, dismissed revered investor Warren Buffett as a “sociopathic grandpa from Omaha”. He also cast Jamie Dimon, chief executive of JPMorgan Chase, and Larry Fink, head of BlackRock, as part of a “finance gerontocracy” that was looking to lock cryptocurrencies out of the mainstream.

His outburst came in front of a cheering crowd at the Bitcoin 2022 conference in Miami, where he described the cryptocurrency as part of a “revolutionary youth movement” that was out to overturn traditional finance, threatening the power and wealth of the establishment.

Thiel, one of the founders of PayPal, has long argued that digital currencies could supplant the current financial system. PayPal gave up on its own digital currency ambitions early in its existence to fit into the existing payments world. While it is now worth $130bn, Thiel described the online payments company as a disappointment compared with what it could have become.

By contrast, he claimed bitcoin, worth $830bn, had the potential to rival all the world’s gold, worth $13tn. With inflation rising and confidence in paper currencies declining, he also claimed that the value of bitcoin could match that of all public equities, which are currently worth $115tn, just as gold had matched equities at the end of the 1970s.

In an incendiary attack, he claimed that financial leaders had deliberately sought to suppress bitcoin to protect their own power. “It’s a movement, and it’s a political question whether this movement is going to succeed, or whether the enemies of the movement are going to succeed in stopping us,” he said. Buffett, he added, was “enemy number one”. 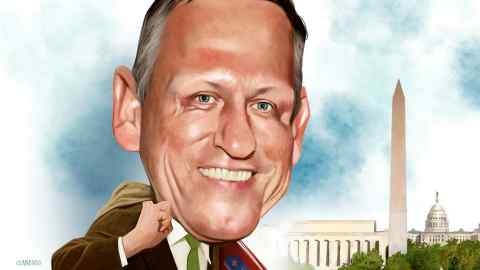 Thiel became the tech world’s most famous rightwing figure in 2016 when he backed Donald Trump’s presidential run and spoke at the Republican convention that year.

On Thursday, he washed out at the fashion for environmental, social and governance investing, depicting it as a core part of the system the financial establishment uses to squash anything that threatens its power.

ESG has become a “hate factory for naming enemies”, he claimed, comparing the focus on social and governance issues to the way the Chinese Communist party operates. He also dismissed environmental investing as “sort of fake”.

In a sideswipe at companies that responded to pressure from politicians or employees over political issues, he added: “Woke companies are quasi-controlled by the government in a way that bitcoin never will be.”

For the latest news and views on fintech from the FT’s network of correspondents around the world, sign up to our weekly newsletter #fintechFT