One man who underwent the therapy was able to last roughly seven times longer in bed.

He underwent the treatment, which involved getting electrodes stuck onto his penis for 30 minutes at a time, three times a week.

Doctors in Lebanon, who treated the unidentified man, say he ejaculated within 40 seconds before seeking help.

But six months after completing the treatment, he was able to pleasure his girlfriend for almost five minutes before climaxing.

The Beirut-based medics called for studies to determine if the device can be rolled out as a safe and drug-free treatment for more patients. 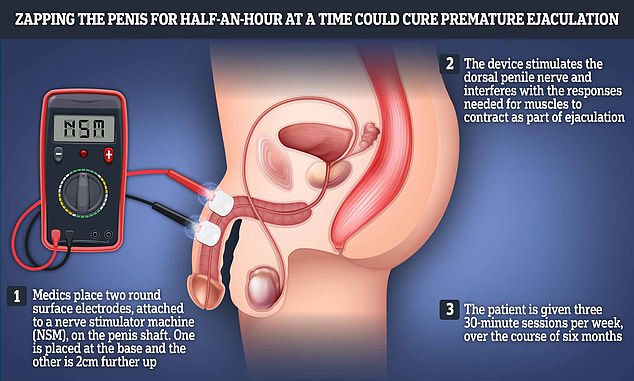 Urologists at Lebanese University told the case of the 28-year-old patient, for whom drugs failed to help.

The patient had been in a relationship with his girlfriend for a year, medics wrote in the Asian Journal of Urology.

They had sex at least twice per week, and he would climax after just 40 seconds ‘on almost all occasions’.

Dr Mohamad Moussa and colleagues trialled running an electrical current through his penis.

They hoped it would stimulate his dorsal penile nerve, one of the nerves that gathers movement and sensation information from the penis.

HOW DOES THE DEVICE WORK?

Medics place two round surface electrodes, attached to a nerve stimulator machine, on the penis shaft.

One is placed at the base and the other is 2cm further up.

The device stimulates the dorsal penile nerve and interferes with the responses needed for muscles to contract as part of ejaculation.

The patient is given three 30-minute sessions per week, over the course of six months.

Whenever the man underwent the zapping therapy, he had two electrodes placed on the surface of his penis.

One was placed at the bottom of his member, while the other sat around 2cm higher up.

Over the course of six months, he underwent three 30-minute sessions each week — where he was exposed to a continuous current.

For comparison, patients who receive deep brain stimulation for Parkinson’s are exposed to more than 100 Hz.

Medics did not say whether the treatment was painful, but studies on similar devices said they can be used ‘without discomfort’.

The man used a stopwatch during sex to measure his intravaginal ejaculation latency time (IELT) — the time from vaginal penetration to ejaculation.

Before the treatment, his IELT was 40 seconds. But by the end of the six-month trial, his average IELT jumped to roughly three minutes and 54 seconds.

And the duration continued to rise even after he stopped using the device, reaching an average of five minutes 14 months later.

That is the average length it takes for men to ejaculate, according to the NHS.

The team said it is ‘not fully understood’ how the device works to improve premature ejaculation.

But during ejaculation, sperm is released through contraction of muscles between the anus and scrotum — called the bulbospongiosus and ischiocavernosus.

The medics believe stimulating the dorsal nerve interferes with the muscles and stops the contracting as quickly.

They said the procedure is non-invasive and called for further studies to determine whether it can be used as a safe and drug-free treatment for premature ejaculation.

Up to 40 percent of men experience the problem at some point. But there is no definition for what is classified as a premature ejaculation.

The NHS advises men to seek help for premature ejaculation if half of their attempts at sex result are cut short.

Premature ejaculation can be caused by prostate problems and taking recreational drugs, as well as by stress and anxiety.

Current treatments include dapoxetine tablets, which are taken a few hours before sex, and lidocaine and prilocaine gels, which delay ejaculation.