The Swiss patient, who has not been named, suffered a rare lung injury normally caused by rigorous exercise or violent coughing fits.

He spent a night in ICU and a further three days in hospital as doctors tried to relieve pain caused by trapped air.

The man went to A&E after suffering sudden chest pain and breathlessness while pleasuring himself in bed.

By the time he arrived his face had swollen and crunching noises could be heard from his neck down to his arms.

Doctors diagnosed him with ‘spontaneous’ pneumomediastinum (SPM), which sees air leak from the lung and become lodged in the ribcage.

They are not sure how the injury occurred but noted but noted that it is most common in young men.

In his case, the trapped air had spread around his body and even up to his skull. In more extreme cases, it can cause a collapsed lung. 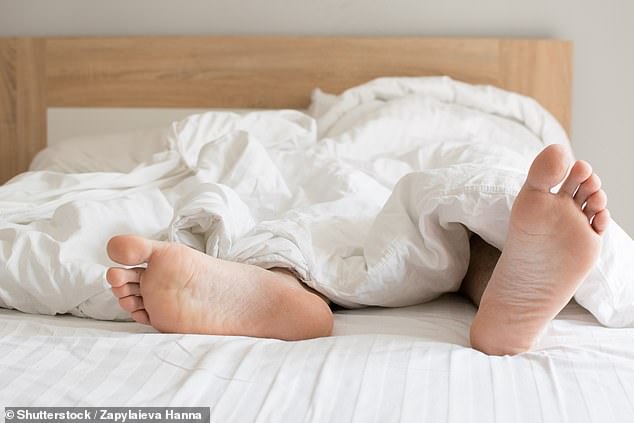 Medics who treated the patient at the Cantonal Hospital in Winterthur said his case was ‘unusual’.

The tale was revealed in the journal Radiology Case Reports.

An X-ray showed he had ‘profound’ amounts of trapped air in his mediastinum, the space in the chest between the lung sacs, known medically as pneumomediastinum.

Escaped air had also traveled to other parts of his body, ‘reaching up until the base of the skull’.

Doctors noted that his face had swollen and cracking sounds could be heard when they pressed their fingers on his neck, chest and arms.

The patient denied using drugs or smoking and said he had not been suffering from a cough or doing strenuous exercise, which made his case ‘spontaneous’.

He was moved to ICU where he was given oxygen support, paracetamol and antibiotic treatment to lower his risk of an infection.

When his condition improved overnight he was moved to a general ward and his chest pain remained for three more days.

He was discharged on the fourth day and his condition was deemed ‘uncomplicated’.

Writing in the report, the medics said: ‘Predisposing factors are history of smoking, acute asthma and recreational drug use (especially cocaine and heroin).

‘Except for history of mild, non-acute asthma no inciting factors were noticed in our patient.

‘There are only a few reports of SPM related to sexual activity and we could not find any cases associated with autoeroticism, which makes our case unusual.’

Spontaneous pneumomediastinum – what is it?

When air becomes trapped in the mediastinum, the space in the chest between the lung sacs, it is known medically as pneumomediastinum.

It can happen for various reasons when pressure rises in the lungs and causes the air sacs (alveoli) to rupture.

It can also occur as a result of direct damage to the lungs, which then allows air to leak into the chest.

The condition is usually not life threatening.

Its main symptom is chest pain, which can come on suddenly and may be severe.

Spontaneous pneumomediastinum (SPM) is the form of the condition that doesn’t result from obvious trauma to the mediastinum or lungs.

However, certain underlying health conditions or events can raise the pressure inside the lungs and begin the process that leads to SPM.

Smoking and drug use are central risk factors. It can occur after strenuous exercise, violent coughing fits or projectile vomiting – which put pressure on the respiratory system.