Christian cinema gets an R-rated makeover in a messy biopic that tries to bring the PureFlix ethos to a wider audience.

A faith-based drama co-starring Mark Wahlberg and Mel Gibson that was written and directed by Gibson’s 31-year-old girlfriend, Rosalind Ross (whose only previous credits are a short film that she co-wrote in 2014 and a guest appearance on one of Laura Ingraham’s demonic talk shows), “Father Stu” doesn’t sound like a movie so much as it does a biblical exercise in faith and forgiveness. Alas, watching this messy-as-hell biopic about a foul-mouthed boxer priest requires a Christ-like amount of both, and inspires precious little of either in return.

Of course, as an agnostic Jew who wouldn’t go within 10 feet of Gibson unless I was wearing one of those padded bomb suits from “The Hurt Locker,” I’m not exactly the target audience for a movie that aspires to feel like a “Passion of the Christ” remake directed by David O. Russell (Wahlberg’s initial creative partner on the project, and a guy whose fingerprints are smudged all over the final product). But as a critic who’s professionally obligated to reckon with the latest trends in Christian cinema, I have to admit that Wahlberg’s R-rated conception of godly entertainment seems almost divine when compared to the culture war militance of “God’s Not Dead” or the Sunday school hokeyness of “I Still Believe.”

Some folks get more spiritual nourishment from a good movie than they do from the Good Book, and “Father Stu” — sloppy and unconvincing as it is — makes a decent case that Wahlberg’s brand of a-PureFlix could eventually produce something raw enough to resonate with people of all religious backgrounds.

“Father Stu” ain’t it. On the contrary, this is one of those “inspiring” biopics so awkward and forced that it leaves you feeling more skeptical about the verifiably true story on which it’s based. Was there an angry but manically charming amateur boxer named Stuart Ignatius who moved from Montana to Los Angeles in a spur-of-the-moment bid to become a movie star? Wikipedia says yes. Did he only get baptized in the hopes that he might score him some points with his devoutly Roman Catholic crush? More or less. Was Ignatius so moved by the spirit of God in the wake of a near-deadly motorcycle accident that he ditched sex for the seminary, spending his last (and most arduous) years on this mortal coil in service to a more eternal kind of love? It’s just implausible enough to believe.

And yet, “Father Stu” feels as logically consistent as the Gospels, and four times longer than all of the combined. The pugilistic spirit of Ross’ debut beats a little more sense out of his script with every passing scene, Stu’s relationship (Wahlberg) with his burnout father (Gibson) becomes even sketchier than his relationship with Jesus Christ, and the character’s vaguely traced evolution from pie-eyed to piety would seem completely weightless if not for the fact that Wahlberg gained 30 pounds of pure body fat to portray the final stages of Stu’s fatal illness.

The formative stages of his life are even less well-defined. We know that Stu first became furious with God over the inexplicable death of his five-year-old brother, and we know that he’s been something of a fighter ever since; that he became a boxer (and remained one longer after it was clear he’d never be paid for it) because punching other people was the closest he could get to punching the creator who made them. And unmade them.

We know that his beer-guzzling pops has been angry for a long time, as well, though it’s unclear if that surliness was born from tragedy, or if Bill Long was always the kind of dad who drinks flat-topped cans of Budweiser and slurs at his kid in between the old talk show episodes he watches on his black-and-white TV (tendencies he continues throughout a movie that bafflingly seems to take place in the 1970s and the early 2000s at the same time). And we know that Stu’s indelicate mother — a goblin-mode Jacki Weaver in her usual role as a morally jaundiced parent who pops up every 20 minutes or so to wail at the heavens or call her son “God’s bitch” — has been far more present in his life.

What we don’t know is how Stu relates to either of these people now that he’s an adult. More to the point, we can’t tell if he managed to escape such a difficult childhood with his mind still intact, or if he’s completely unhinged from the moment this movie starts. Ross seems to believe that “Father Stu” is a heartwarming tale about a quirky and quixotic survivor who takes life’s hits on the chin and moves to LA in search of another impossible dream the day after he boxes his last match, but her shapeless direction and tin-eared banter aren’t able to contain an irrepressible Wahlberg performance that doesn’t tilt at windmills so much as it plows straight into them. By the time Stu stalks his Dulcinea (Teresa Ruiz in the role of Carmen) from his supermarket to her church, the guy seems less like a whimsical scamp than he does a wacky sociopath. 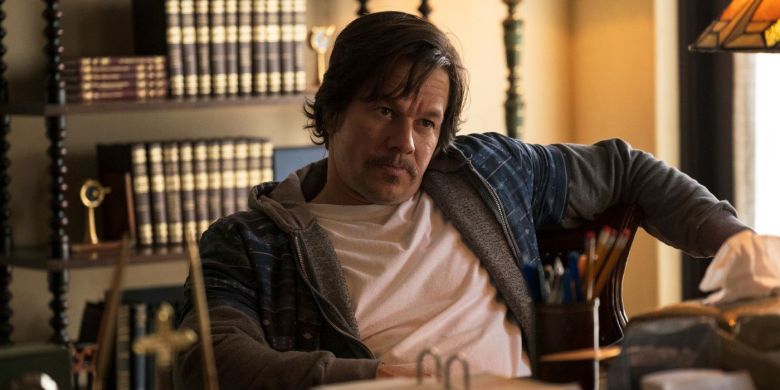 “Father Stu” calls him out on this stuff, and understandably leaves any higher judgment up to Jesus, but it’s hard to buy Stu’s transition from wayward son to cool father if we never believe that anyone would become a willing member of his flock (all but one of the parishioners at Carmen’s Mexican-American church are thoroughly charmed by the manic white guy who makes himself the center of their congregation). I mean, this movie is such a mess that it can be hard to follow Stu’s transition from one shot to the next. It’s bad enough that the scene where Stu tries and fails to borrow his dad’s car leaves us without any understanding of their current relationship, wasting the film’s best chance of building an emotional foundation for the medical crisis that will bond them together in the third act; it’s worse than the very next scene inexplicably begins with Stu on a random motorcycle.

Later, after receiving some unsolicited advice from a Christ-like bar rat at his local watering hole, Stu will get “Meet Joe Black”-ed by two different cars after drunkenly crashing that same motorcycle, only to be saved by a life-altering vision of the Virgin Mary. It will not be the last misfortune that Stu will suffer with grace, nor the last crucible that he will embrace as an opportunity to feel closer to God’s love. His dignity in the face of death is almost objectively beautiful — regardless of the theological rationale behind it — and a better movie would have made it easier to appreciate how Wahlberg’s natural tenacity is so well-suited to the role. It also would’ve been easier without the incomprehensibly jabber-jawed accent he brings to the table as part of a performance that forever redefines the meaning of “South Boston.”

It would be cruelly overstating the case to suggest that “Father Stu” might be improved by the fact that half of its dialogue is unintelligible, but Ross’ fast-paced banter isn’t sharp enough to compensate for her underlit film’s shallow characterizations or abject lack of narrative flow. Malcolm McDowell is completely stranded by his stunted scenes as a skeptical monsignor, and Mel Gibson (terrible food, and in such small portions) is never given a chance to earn his bad dad stereotype a measure of redemption.

Faith can only get you so far without structure, and the sincerity of this movie’s pivot from punishment to salvation doesn’t stop it from stalling out in purgatory along the way. You don’t feel the healing between a man and his son. You don’t feel that son becoming a different kind of father. And when Stu finally hears the message that God has been trying to send him through his body — that it’s OK to give up the fight — you don’t feel like “Father Stu” has any idea how to share it with the world.

A Sony release, “Father Stu” will be released in theaters on Friday, April 15.

Sign Up: Stay on top of the latest breaking movie and TV news! Sign up for our Email Newsletters here.