One in four American adults are living with potentially life-threatening liver disease sparked by over-eating, a leading heart disease association has warned.

It normally triggers no warning signs in the early stages, but after several years can cause pain and discomfort in the upper right abdomen and swelling.

Left unchecked, the disease may lead to inflammation, scarring of the liver and even organ failure.

The American Heart Association (AHA) — in its first statement on the subject — today called for improvements in diagnosis methods and more awareness of the illness.

Its chair Dr Paul Duell, who is also a diabetes expert at Oregon University, warned the condition is often ‘hidden or missed’ during routine medical scans. 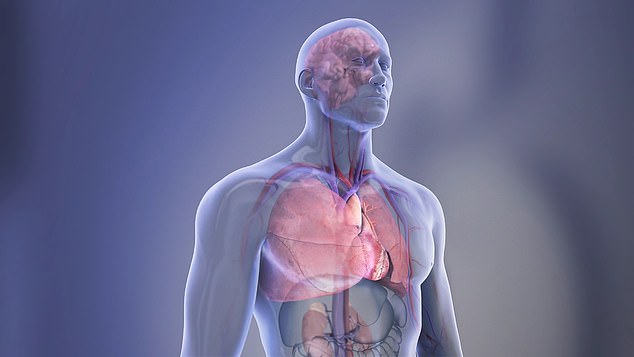 The disease is the most common liver problem in the US, affecting one in four adults — or 64 million people.

Estimates suggest more than a million adults die from the condition every year.

NAFLD is an umbrella term covering chronic liver conditions sparked by too much fat that do not cause long-term damage.

Non-alcoholic fatty liver disease (NAFLD) is when too much fat builds up in the liver.

It normally triggers no warning signs in the early stages.

But over years can progress into a potentially fatal condition triggering inflammation, scarring of the liver and even organ failure.

The condition is currently mostly diagnosed through routine blood tests.

But these often miss cases, or have warning signs mis-attributed to recent alcohol consumption or medications.

People who are obese and have diabetes or high blood pressure are most at risk from the condition.

Treatment centers around lifestyle changes to trigger an up to 10 per cent weight loss.

But over time it can progress to non-alcoholic steatohepatitis (NASH), which triggers inflammation and scarring on the vital organ.

People who are overweight, obese and have diabetes or high blood pressure are most at risk from the condition, doctors say.

About 40 percent of adults in the US — or 100 million people — are obese, estimates from the Centers for Disease Control and Prevention (CDC) suggest.

Treatments for those who have the disease center around lifestyle changes to trigger an up to 10 percent loss of body weight.

To diagnose the condition doctors currently use routine blood tests.

But the AHA warned these often do not pick up liver abnormalities, and that in some cases warning signs are misattributed to the side-effects of medication and recent alcohol consumption.

In later stages, the condition is diagnosed through a biopsy, but this is expensive and involves surgery.

To improve diagnosis rates, the AHA suggests doctors should switch to using specialized ultrasound that can measure liver elasticity, fat and stiffness.

‘It is important to know about the condition and treat it early because it is a risk factor for chronic liver damage and cardiovascular disease.’

‘Although healthy living can help avert NAFLD in many individuals, some may develop NAFLD despite their best efforts.

‘At the other end of the spectrum, some individuals may have a genetic make-up that protects them from developing NAFLD despite having obesity, type 2 diabetes, metabolic syndrome, unhealthy dietary habits or being sedentary.’

He added that a lack of awareness of the condition has ‘contributed’ to underdiagnoses.

The AHA’s statement was published in the journal of Arteriosclerosis, Thrombosis and Vascular Biology.